President Barack Obama is making final preparations for his State of the Union address to Congress.

The address is the last State of the Union speech he will give as president. In a radio broadcast Saturday, Obama previewed part of the speech. He said that "America can do anything".

Tuesday night, the president will remember his accomplishments in office. But White House staff members say Obama will also talk of the country's future. 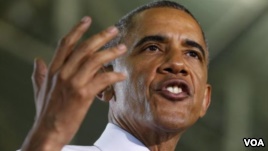 White House Chief of Staff Denis McDonough said, "He (the president) doesn't want this to be your traditional policy speech that outlines a series of proposals. Rather, he wanted to take a step back and look at the future of this country."

Obama will surely talk about the growing number of jobs during his years as president. He is also expected to note actions aimed at improving the health of the environment and passage of the Affordable Care Act, known as Obamacare. And he will note the 2009 government bailout of American automakers General Motors and Chrysler. He considers that financial rescue effort his biggest success, according to USA Today.

The Republican Party has long dismissed Obama's economic record. Republican critics differ over what has been accomplished over the past seven years and what should be done in the future.

"The president is going to talk about the future and try to paint a rosy picture where one does not exist," said Senate Majority Leader Mitch McConnell, a Republican. He spoke on ABC Television's This Week program. "What we'd love to hear from the president is a real plan to defeat ISIL (the Islamic State)," he added.

He had gone to see the preview of a play.
他去看过一出戏的预演=N*lNqaT3)v6=。

one of the biggest government bailouts of a private company in years.
政府近年来对私人公司最大的紧急财政援助之一u*DyG&OYMhU^s。

1.Republican critics differ over what has been accomplished over the past seven years and what should be done in the future.

The two sides in the dispute still differ over the question of pay.
争执的双方在报酬问题上仍各持已见b[acL_o#Bcn_n[4^9G。

The banks are paying a fee to the government for insuring their toxic assets and analysts differ over whether they will be forced to shoulder losses above that level. 银行将为政府为他们的有毒资产提供的保险支出一定费用[u!NZN+w]OzLu%。 但对于他们是否必须承担那些费用以上的损失，分析师们意见各异lD!M5MD(JQtgLQCN]Pg。

2.The president is going to talk about the future and try to paint a rosy picture where one does not exist,

He went on to paint a rosy picture about how much has already been accomplished.
他继续描绘着已经取得多大成就的美好画卷QCJ#t-J%&q(SEt[_Vq_#。