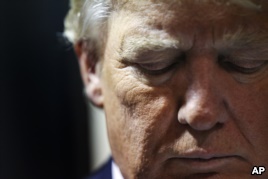 British lawmakers have scheduled a debate about whether to ban U.S. Republican presidential candidate Donald Trump from Britain.

The lawmakers responded to a petition signed by more than a half-million people that called for banning Trump.

The British government responds to all petitions that have more than 10,000 signatures. Topics are considered for debate in parliament if a petition reaches 100,000 signatures.

In December, Trump called for a ban on all Muslims entering the United States.

He asked for the ban after a December 2 mass shooting that killed 14 people in California. The alleged shooters were two Muslims whom the FBI said had been radicalized.

The debate over banning Trump from Britain is scheduled for January 18. The Associated Press reported that any conclusion from the debate by the lawmakers will not be binding.

"A debate will allow a range of views to be expressed," House of Commons spokesperson Helen Jones said.

The petition was launched by longtime Trump critic Suzanne Kelly. Kelly is a Scottish-based campaigner and writer.

A ban from the U.K. could hurt Trump personally and professionally. He has business interests in Britain and personal ties to Scotland, according to the Washington Post.

A separate petition opposes the banning of Trump. That petition has been signed nearly 40,000 times.

The debate on January 18 can be viewed online.