Travelers passing from Denmark into Sweden must show photo identification. The move by Sweden is an attempt to stop the flow of undocumented migrants into the country.

The border checks between the two countries mean travelers will have to show their passports for the first time in more than 50 years. 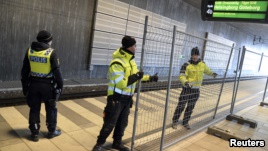 A temporary fence is erected between domestic and international tracks is seen at Hyllie train station in southern Malmo, Sweden, Jan. 3, 2016.

A temporary fence is erected between domestic and international tracks is seen at Hyllie train station in southern Malmo, Sweden, Jan. 3, 2016.

Thousands of daily commuters will be affected by the new order. The Local, Stockholm's English newspaper, reported "short" delays, and lines were "moving swiftly" on the first day of enforcement.

Travelers were warned to expect long lines on the Danish side of the Oresund Bridge. That bridge is a major entry point for migrants wishing to enter Sweden.

The Swedish border controls will continue for three years, according to the New York Times.

Following the Swedish border checks, Denmark started its own security checks at the German border, according to the New York Times. The Danish border checks will last for 10 days, the Times reported, and an extension is possible.

Some 160,000 migrants came to Sweden in 2015. Europe and the Mideast are facing the largest refugee crisis since World War II. More than 1 million migrants from Syria, Afghanistan and Iraq sought asylum in Europe in 2015, according to the United Nations.