Who Is Buried in Queen Nefertiti's Tomb?
She was known for her beauty.
Mystery still surrounds her death.
For thousands of years, people wondered: What happened to Queen Nefertiti?
She lived and died in the 14th century B.C.
But where is her body buried?
It remains a mystery. People have guessed and searched, but always come up empty-handed.
Now, archaeologists think they might be close to an answer ...
She might be behind this wall, in a hidden chamber, or room, inside King Tutankhamun's tomb. He's better known as King Tut.
Tut is famous for the discovery of his tomb — found undisturbed, while many others were robbed years ago.
An X-ray machine was brought in to help in the search. With cameras recording the event, a Japanese radar specialist used modern technology to get an ancient tomb to give up its secrets.
Egyptian Antiquities Minister Mamdouh al-Damaty told reporters recently that before the X-ray scans, there was a 60 percent chance that something was behind those walls.
Now, he says, "it's 90 percent likely there is something behind these walls."
British Archaeologist Nicolas Reeves has been investigating.
"The proposal I put forward was that the burial of Tutankhamun was actually a tomb within a tomb."
But why King Tut's tomb?
King Tut died when he was only 19 years old. Queen Nefertiti, his step-mother, had died earlier.
There might not have been time to build Tut his own tomb, so some believe he is actually buried in a chamber off a larger tomb. Was it Nefertiti's?
King Tut's tomb is smaller than other pharaohs. Experts ask: Why is it shaped more like those of Egyptian queens of the time?
The next step to finding these answers is a month-long analysis of the X-rays in Japan. Then the exploration continues in Luxor.
If the mystery is solved, if, indeed it is Nefertiti's tomb, it will be the largest discovery in Egypt in a long time. And that could mean more tourists will return to the Valley of the Kings.
I'm Anne Ball.

They dedicated a monument in memory of those who died in the great earthquake.
他们为悼念死于大地震的人们建造纪念碑GC0OP|JFBz^S@*%%。

Come up to the fire, and you will thaw out.
到火炉边来,你就会觉得暖和!6!,Tm,c(wuIA[FofET。

In a little while, the salesman came back empty-handed.
又过了半晌，伙计却是空手回来l_#c|Y[9Jf!。

She had raised her voice to bring in the other two customers.
她故意提高嗓门，想把另外那两名顾客也吸引过来4-9N5v3B^9&pprV7C。

1."The proposal I put forward was that the burial of Tutankhamun was actually a tomb within a tomb."

It's not like him to put forward suggestions wholly void of sense.
他才不会提毫无见识的建议呢8=@Q^,+Pf2ZiEcH。
All sorts of theories were put forward to account for his apparent affluence.
大家用各种各样的理由来解释他手头宽裕的原因7VMgC0h.v@=TK-t。

2.With cameras recording the event, a Japanese radar specialist used modern technology to get an ancient tomb to give up its secrets.

The impact of modern technology on the biosphere is evident worldwide.
现代技术对生物圈的影响在全世界是明显的1&k*Ixl.xw0。
One of the great advances in modern technology has been the invention of computers.
现代科技所取得的最大进展之一是计算机的发明Utk2Awgh40。 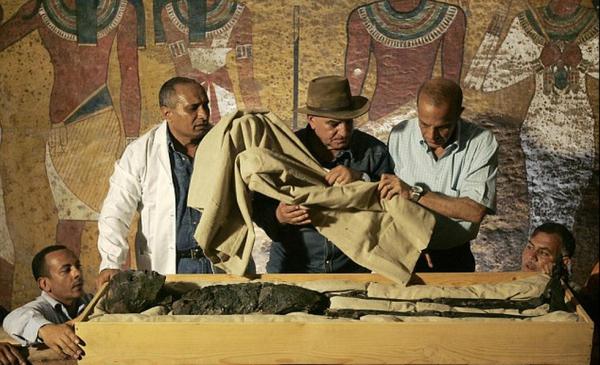