Americans Driven by 'Gut Instinct' to Act in Train Attack
Three Americans, a Briton and a French citizen stopped a heavily-armed gunman on a high-speed train in France last week. The Americans said later that gut instinct -- a feeling they had -- made them jump into action to stop the gunman.
Spencer Stone, Alek Skarlatos and Anthony Sadler told their story on Sunday to reporters at the United States Embassy in Paris. They described how they overpowered Ayoub El-Khazzani on the train. Spencer Stone wore a thick bandage on his thumb that was almost cut off during their struggle.
Both Mr. Stone and Alek Skarlatos have military training. But Mr. Skarlatos says the training did not influence their actions. Instead, he says it was a survival instinct -- wanting to stay alive -- that drove them to act.
"I feel our training mostly kicked in after the assailant was already subdued, frankly. When it came to medical care and things like that, and providing security and making sure there wasn't another shooter. But in the beginning, it was mostly gut instinct."
The Americans, the Briton and the French citizen have been praised for stopping what could have been a bloodbath. On Monday, French President Francois Hollande presented France's highest honor–the Legion of Honor–to the four foreigners. The president also honored the Frenchman, who first discovered the gunman near a restroom on a train car.
The train was carrying 554 people to Paris when the man started his attack, firing his weapons. Ayoub El-Khazzani was heavily armed. But no one died in the attack. Mr. Skarlatos says he thinks the gunman had little experience using weapons.
"He clearly had no firearms training whatsoever, and yes, if he knew what he was doing—or even just got lucky and the did right thing—he would have been able to operate through all eight of those magazines and we would have been in trouble and probably wouldn't be here today, along with a lot of other people."
French officials are still questioning the Moroccan-born gunman. He is believed to have links to Islamic extremists and may have travelled to Syria. On Sunday, his lawyer told French TV that Mr. Khazzani is shocked to be linked to terrorism. She says he said he found the weapons, and wanted to rob passengers on the train.
I'm Anne Ball.

Today we live in a society driven by the dollar.
当今 我们生活在一个被金钱驱使的社会中W3FUt6,%;0#%R;O3%T7F。

The school was evacuated and rescue workers, fire fighters and heavily-armed black-clad SWAT teams rushed to the scene.
如今，该学校已经被疏散，救援人员、消防队、全副武装的黑衣特战队也冲入现场].657#J.Pix=GNzSwP1。

The boy throw off his clothes and jump into the water.
男孩匆匆脱下衣服, 跳入水中XdHp+WrHjn,~3p2zw9fZ。

1.Both Mr. Stone and Alek Skarlatos have military training. But Mr. Skarlatos says the training did not influence their actions.

This year the government deemphasized military training at schools.
今年政府不再强调学校军训s3W!NHTB4m-rdC5Mq;oD。

After paying the armymen's salaries, clothing, meals and transport, there is limited amount left for military training and the upgrading, research and development of arms.
这么一点经费，既要顾及军人衣食住行，又要负担军人薪水，直接用于军事训练、武器更新换代、研制开发武器的资金实际已经不多)=0~*o*;I(。
2."I feel our training mostly kicked in after the assailant was already subdued, frankly. When it came to medical care and things like that, and providing security and making sure there wasn't another shooter. But in the beginning, it was mostly gut instinct."

It was as though Toby had been kicked in the stomach.
托比的心窝里好象被踹了一脚;S+Wxj9P~Tjk#|[&A。

When we intuitively know that something is happening, or about to happen, our instinct has kicked in.
当我们凭直觉知道某些事情正在发生或即将发生时, 我们的本能就已发生作用了8u)*MSmf;nhWf&;#]L。 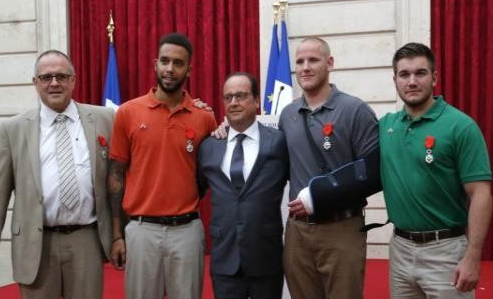