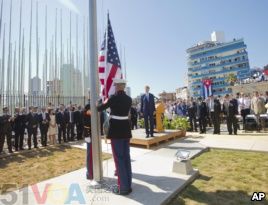 U.S. Secretary of State John Kerry took part in a ceremony Friday to raise the U.S. flag at the country's reopened embassy in Havana, Cuba. Mr. Kerry is the first U.S. secretary of state to visit Cuba in 70 years. He called the ceremony a memorable occasion. He also said it was "a day for pushing aside old barriers and exploring new possibilities."

Some members of the U.S. Congress traveled to Cuba alongside Mr. Kerry. They include three retired U.S. Marines – Larry Morris, Mike East, and Jim Tracey. In 1961, the three men lowered the flag on the U.S. embassy in Havana for the last time.

Mr. Kerry will meet Friday with Cuban Minister of Foreign Affairs Bruno Rodriguez. But the secretary has no planned meeting with Cuban President Raul Castro.

A top U.S. official noted that Cuban dissidents would not be part of the ceremony at the U.S. Embassy. Human rights activists have criticized the decision. Frank Calzon is a Cuban-American activist for human rights. He called the move to normalize relations with Cuba a setback for Cuban dissidents.

Mr. Kerry said this week that human rights issues are, in his words, "at the top of our agenda in terms of the first things that will be focused on in our direct engagement with the Cuban government."

Members of Cuban civil society, including political, human rights and media activists, were invited to a second, larger ceremony later in the day. It will be held at the home of the chief of the U.S. mission in Cuba, Jeffrey DeLaurentis.

President Barack Obama has not yet appointed an ambassador to Cuba.