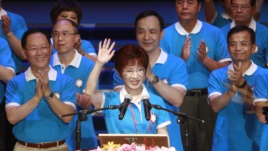 Taiwanese voters are all but sure to elect a woman as their next president. The elections will be held in January. On Sunday, the ruling Nationalist Party chose Hung Hsiu-chu as its candidate. She is Taiwan's deputy legislative speaker and a former teacher. She will face Tsai Ing-wen, the head of the Democratic Progressive Party.

Taiwan has never had two female candidates representing the major parties in presidential elections or elected a woman as president.

Hung Hsiu-chu is the first female presidential candidate from Taiwan's ruling Nationalist Party. The opposition Democratic Progressive Party candidate, Tsai Ing-wen, was a candidate for president in 2012. But she lost to the man who is now president, Ma Ying-jeou.

\Women have become heads of state in India, South Korea and other parts of Asia, but never in Taiwan.

Philip Yang is a spokesman for the Nationalist candidates' campaign. He says Taiwan stands out already because two women are competing.

"It's not in other countries that both opposition – major opposition – and ruling party candidates are both female. So this is probably making this campaign very interesting."

Ms. Hung is 67 years old and a former teacher. She is known best for asking sharp and sometimes humorous questions of officials who are called into the legislature to explain the work of government.

Her rival, Ms. Tsai, is 58 years old and a lawyer by training. She lost the 2012 presidential race by six percentage points to Ma Ying-jeou.

Political observers say Taiwanese voters can accept a woman as president because their democracy has developed since it began in the late 1980s. Women over 50 were traditionally seen as able leaders in Chinese culture.

A third of Taiwan's legislators are female. Women also lead some of the island's top businesses.

As a sign that the sex of a candidate is a minor issue for voters, debate about the presidency has moved on to Taiwan's relationship with China.

The government on the mainland has claimed sovereignty over self-ruled Taiwan since 1940s. Chinese leaders want the two sides to unite. But studies show Taiwanese people choose the current form of autonomy.

President Ma set aside political disputes with China in 2008 to open dialogue that has led to a series of economic agreements. Ms. Hung wants to keep up that dialogue on Beijing's condition that both sides see themselves as a single China. But she says there can be different ideas about what that means.

"Both candidates have been public figures for considerable amounts of time, so there are certainly things to look at in their past records or their position on current issues that are enough to talk about without making gender an issue."

Many Taiwanese want Taiwan to move slowly on its relationship with China. Surveys show Ms. Tsai leading her opponent with about six months before the vote. The winner will replace President Ma in May when he leaves office at the end of his term.