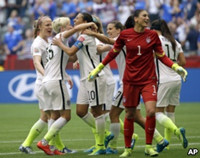 The Women's World Cup final match between the U.S. and Japan set all kinds of records over the weekend. One record the historic match did not set: money.

American Carli Lloyd became the first woman to score a "hat trick" in a final match. In other words, Lloyd scored three goals in the game. She also broke the record for the fastest three goals scored in Women's World Cup history.

With seven total goals between the U.S. and Japan, the game was the highest-scoring final in World Cup history. The U.S. team set a record of its own, with five goals scored in the final match.

Despite record-breaking television audiences and historic plays, the U.S. women's team will receive only $2 million for winning its third World Cup – the only women's team ever to do so.

In comparison, the German team walked away with $35 million when it won the Men's World Cup last year.

It comes down to revenue.

In its 2014 financial report, FIFA stated that the Men's World Cup in Brazil made more than $4.8 billion from broadcasters, advertisers and ticket sales. The men received more than $570 million in prize money last year in Brazil.

FIFA's prize money for the women's tournament in Canada this year was just $15 million.

American soccer player Megan Rapinoe said to the Associated Press, "I don't think $500 million would necessarily be a number that we're looking for in terms of the number of sponsors they bring in and world views and the amount of money the men's World Cup generates, but something more than ($15 million) would probably be appropriate."

With her record-setting performance in the final, Carli Lloyd received the Golden Ball, given to the tournament's most valuable player. Experts believe that opportunities remain golden for Lloyd, with the possibility of many sponsorship deals.

And with the U.S. Treasury Department looking for a woman to appear on the new $10 bill, U.S. Soccer Women's National Team sent out a Tweet suggesting some of their players:

"We've got an idea for a new $10 & $1. How about the best Women's Player and Goalkeeper in the World" The Twitter message was posted along with photos of Lloyd and goalkeeper Hope Solo.