From VOA Learning English, this is In The News.

Labor groups, businesses and people around the world are condemning the human cost of a building collapse in Bangladesh. More than 500 people are confirmed dead after the building failure on April 24th.

In the capital, Dhaka, tens of thousands of textile workers ended a week-long protest and reported to their jobs on Thursday. The collapsed building had housed several clothing factories. The workers had launched the protest to demand better working conditions.

The $20 billion dollar textile industry in Bangladesh makes up 80 percent of the country's exports. Bangladesh's Garment Manufacturers and Exporters Association says it is working to prevent future incidents. Association representative Shahidullah Azim says his group is working with government officials. He says the team will move immediately to report unsafe conditions to the government.

However, clothing workers and activists say they have heard similar promises before. Just six months ago, more than 100 people were killed in a factory fire in Dhaka.

The day before the building collapse, an engineer warned of cracks in the structure. Some concerned business owners had sent workers home. 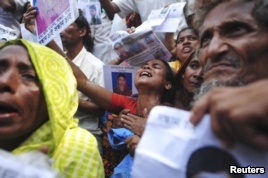 Relatives mourn as they look for garment workers.

Alonzo Suson works with the Bangladesh Center for Workers' Solidarity. He is not sure whether working conditions will change when most textile workers earn less than $50 a month. He tells of a 16-year-old who was told she would lose a week's pay if she failed to enter the factory.

Doctors had to remove the young woman's arm after she was severely injured in the collapse. Alonzo Suson says clothing workers cannot refuse to work in unsafe conditions. He says some workers know the place where they work is unsafe. But the workers need the job to survive.

Mr. Suson says Bangladesh's clothing industry needs more inspectors and laws for building safety. He says only 25 to 30 factories have labor unions, and most were organized in the past six months.

In Dhaka, police have detained the owner of the collapsed building. Some protesters say he should be sentenced to death. Police have also arrested factory owners and building engineers for ignoring safety issues.

Activists say people overseas must also take responsibility -- both those who sell clothing and buyers of the clothes made in unsafe factories.

On Thursday, the European Union said it may change its trade agreement with Bangladesh. The EU called on Bangladeshi officials to ensure that the country's factories obey international labor rules.

Europe is Bangladesh's largest trading partner. Ineke Zeldenrust is with the activist Clean Clothes Campaign in Europe. She says western clothing stores have ignored warnings about the dangerous conditions in foreign factories. She says Western businesses must promise to pay more to clothing manufacturers and demand safer factories.

And that's IN THE NEWS, written by Anker Decker, I'm Steve Ember.

All the textile prices have been marked down.
所有的纺织品都减价了62VGPJV_T&Twtd*H_;e.。

The luggage was plumbed by the customs inspector.
行李由海关检查员加上了铅封(HTng,xn0)B。

You must obey her without question.
你必须绝对服从她的命令lXqj1@!Htl。