From VOA Learning English, this is IN THE NEWS.

American law enforcement officials this week looked for suspects in the bombings at the Boston Marathon. Three people were killed when two bombs exploded near the finish line on Monday. More than 170 others were injured.

On Thursday, federal investigators released a video tape and pictures taken around the time of the Boston bombings. The images showed two young men carrying backpacks. Officials believe the bombs were transported in the bags. 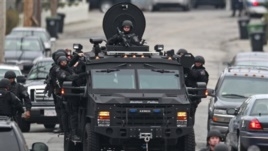 Police patrol through a neighborhood in Watertown, Mass., while searching for a suspect in the Boston Marathon bombings.

On Friday, police identified the suspects as brothers and ethnic Chechens. The two were born in Kyrgyzstan and lived for several years in Dagestan before coming to the United States as refugees.

The uncle of the brothers spoke to reporters from his home in the state of Maryland. He says the brothers' family is Muslim. He also confirmed their ethnic identity.

The issue of identity is complex.

Aslan Doukaev directs the North Caucasus Service of Radio Free Europe/Radio Liberty. He spoke to us from the Czech Republic.

"Yes, I am familiar--I'm myself of Chechen origin and I know the social structure and I think I can speak about that. But if we're going to talk about these two young persons, they had, they lived all their lives outside of Chechnya so it's probably, it is probably not, would be not correct on my part to speak about them as part of this Chechnya, Chechen society or Chechen environment.

Mr. Doukaev says the young men appear to be unlike other terror suspects.

Stephanie Nawyn is an assistant professor of Sociology at Michigan State University. She has studied refugee resettlement and social inclusion of both male and female refugees. She says many refugees can experience a lack of belonging in a new country.

"Most will tell you that it takes about five to six years, to feel like they can be part of their communities. And most refugees actually do get to that point, where they feel integrated. But this initial alienation is quite common. However, it very, very rarely translates into this kind of anti-social behavior."

She says that when violence takes place, it is the work of young people who came to the country as children.

"I think, too, it is important to recognize this almost always happens among men. And among men who feel like they aren't able to achieve the kinds of status that they would like or that they are deserving of and that is not just a threat to them, you know, to their sense of what they deserve based on their class status. But it is a threat to what they feel they deserve as men."

And that's IN THE NEWS, written by George Grow and Onka Dekker. I'm Kelly Jean Kelly.

We need to restore respect for the law enforcement agencies.
我们需要重建对于执法机关的尊重~)Q0Mb#UN2。

I try to cover bare leg with backpack.
我试图用背包来盖住我的光腿^iga29&F+#j%。

The unexpected news baffled me.
意料之外的消息使我困惑不解I]CTy8Q511Ma6ZaD。

Her sense of alienation from the world disappeared.
她与世界脱节的感觉消失了kP|*ut)^0pI+D。