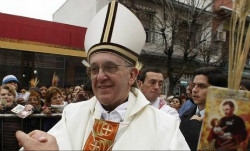 Catholics around the world have been welcoming the new pope. He is Cardinal Jorge Mario Bergoglio from Argentina. He is the first pope from outside Europe in more than one thousand years. And he is the first pope to take the name Francis.

VOA’s Jack Payton reported on the Vatican for many years. He talked to VOA’s David Byrd about Pope Francis and his position on issues in the Roman Catholic Church.

“He’s known for having very traditional Catholic attitudes towards doctrine. This involves questions of women priests, celibacy, all of these issues.

Where he differs on some of these issues is his view of what they call social issues. Helping the poor. He’s known to favor a more equitable distribution of wealth.”

“And of course there are also issues like the sexual abuse scandal in the church itself that he’s going to have to deal with.”

“One of many issues. The sexual abuse scandal, as you know, has been bubbling up for the past decade. And we don’t know his position on that. It’s most likely he’s going to be a very tough disciplinarian on that issue, as was Pope Benedict.”

The world has more than a billion Catholics. Leaders of countries with large Catholic populations have been offering congratulations to Pope Francis. And so have leaders of other countries. At the same time, Jim Tedder reports that some people are hoping the new pope can improve relations between Catholics and Muslims.

Relations between Catholic and Muslim leaders were tense under the last pope. They became especially difficult after a speech that Benedict the Sixteenth made in Germany in 2006. Many Muslims objected to a story he told about the Prophet Muhammed spreading Islam through violence -- “by the sword."

The Organization of the Islamic Cooperation represents 57 countries. Its secretary-general sent a letter congratulating Pope Francis and saying he hoped a “sincere friendship” would be renewed.

One of the organization’s senior leaders, who is Palestinian, also welcomed the new pope. Saeb Erekat talked about an invitation from Palestinian Authority President Mahmoud Abbas for a visit by Pope Francis.

“President Abbas extended an invitation to his holiness to visit the Holy Land – to visit Jerusalem and to visit Bethlehem.”

“The holy pope is a meaningful leader for all of us, not just for the Catholic community.”

President Barack Obama called Pope Francis a defender of the poor. He said choosing a pope from Latin America shows how strong and important that area is becoming.

And in Argentina, where Pope Francis is from, people in the capital of Buenos Aires gathered outside the city’s main church.

One Argentine said she is happy not just for herself, but for the entire Catholic church.

The president of Argentina, Cristina Fernandez, praised the new pope's decision to take the name Francis.

“We wish from the bottom of our hearts that Francisco will be able to achieve a greater level of understanding between people, between religions. That choosing the name Francisco, which I believe is in reference to St. Francis of Assisi, the saint of the poor, will be the option chosen by the highest Church leaders so that we can finally reunite all humanity, all humans as equal, with fellowship, with love, with justice and equity.”

President Fernandez clashed in the past with Pope Francis over the issue of gay marriage.

Pope Francis represents another first. He is the first Jesuit pope. The Jesuits are a group within the Catholic Church known for their focus on education and the poor. Caty Weaver tells about the history of the Jesuits.

The Society of Jesus is the official name of the Jesuit order. The group is nearly 500 years old. But that is a lot younger than many other Catholic orders, such as the Benedictines and Dominicans. Father William Currie is a Jesuit and the former president of a Jesuit school in Tokyo. He says “Jesuitical” used to be a bad word.

“It meant someone who was devious and sly and cunning and that sort of thing.”

Ricardo Jalbuena attended Jesuit schools in the Philippines for almost his entire education.

“The beauty about the Jesuit community is that it is a very dynamic and diverse culture of great theological minds, who are always there to study, explore, challenge ideas.”

Many Jesuits live humble lives, without fancy homes, cars or expensive clothes. That humility is one reason that many people have said the new pope chose the name Francis. Francis of Assisi is a Catholic saint who led a poor, simple lifestyle.

But Mr. Jalbuena believes Pope Francis chose his name for Francis Xavier. That was one of the Jesuits’ founders. In the sixteenth century, Francis Xavier spent years bringing the Catholic faith to India, Indonesia and Japan.

The new pope has not yet said why he chose the name Francis.

And I’m Kelly Jean Kelly. That’s all the time we have for today.