At least 77 of the Catholic Church's 115 cardinals chose the new Pope during a vote in the Vatican in Rome. The new leader, called Pope Francis, later joked to the public that the cardinals went almost to the end of the earth to find a new Pope.

He follows Pope Emeritus Benedict in office. The former pope resigned the position because, at age 85, he said he lacked the strength to continue his work. 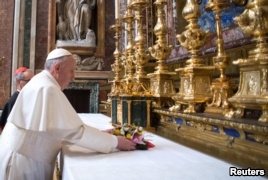 Pope Francis appearing hours after he was first elected leader of Catholics around the world.

On Thursday, Pope Francis led his first Mass as Pope for the cardinals who elected him. He urged them to remain faithful to the Gospel, the teachings of those who follow Jesus Christ, and avoid modern desires.

Pope Francis was born Jorge Mario Bergolio in Buenos Aires, Argentina on December 17, 1936 to immigrant Italian parents. In 1960 he earned a philosophy degree from the Catholic University in Buenos Aires. Later he received a master's degree in chemistry at the University of Buenos Aires. He officially became a priest in 1969. For many years he taught in Catholic schools and schools for priests-in-training. Pope Francis became the new Archbishop of Buenos Aires in 1998. He was made a cardinal by Pope John Paul Second in February of 2001.

Pope Francis is known for his conservative beliefs. Argentina became the first Latin American country to make same-sex marriage legal in 2010. At that time, he called on priests across the nation to urge Catholics to protest. He said the legislation would be harmful to the family. But, even though he opposes homosexuality, he has called for respect toward people who love others of the same sex.

Catholic Church expert Father Thomas Reese says Pope Francis rose through church leadership in Argentina while continuing a simple life.
"He takes his vow of poverty very seriously. He refused to live in the Bishop's palace, he moved to a very simple apartment, cooked his own meals and he didn't want the chauffeur-driven limousine that the bishop normally had."

This week, after holding his first Mass, the new Pope requested guards to take him to the hotel where he was staying so he could pay his bill and collect his suitcases.

The former Cardinal Bergolio is the first to choose Francis as his papal name. In doing so, Pope Francis has linked himself with the 13th century Italian priest who led his life in poverty, the man who became known as Saint Francis of Assisi.

Next week, the new Pope will be officially installed.

The Cardinal coloured with vexation.
红衣主教感到恼火，脸涨得通红xL!cogoEl!。

We must never be unworthy of our teachers' untiring and sincere teachings.
我们决不要辜负老师的谆谆教导~UeNc3d*)7!Xr^~id。

His main job was guarding Dodi, acting as his chauffeur, bodyguard and dogsbody.
他的主要工作是保护多迪，当多迪的司机、保镖和勤杂工H3hE,CU~KdR*。

She got a limousine by herself.
她靠自己的努力得到了一辆豪华轿车.(JGwrDGML。