This week, NBC News reported on a document written by the Department of Justice on the policy of targeted killings of American terrorism suspects. The document is a "white paper" titled "Lawfulness of a Lethal Operation Directed Against a U.S. Citizen Who is a Senior Operational Leader of Al Qa'ida or An Associated Force. "

In the memo, the Justice Department says using deadly force in a foreign country against a United States citizen would be lawful if three conditions are met. The first condition is that an informed, high-level official of the United States government has found that the targeted person presents an "imminent threat of violent attack against the United States."

The paper details the reasons and conditions that a targeted killing of a United States citizen overseas would be lawful under American and international law. The department also provides its reasons why these targeted killings would not violate the constitutional rights of American citizens. 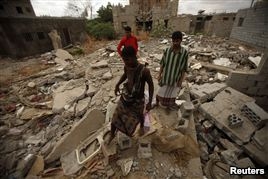 People walk on the wreckage of a house destroyed by an air strike last year that was targeting al Qaeda-linked militants, in the southern Yemeni town of Jaar, February 1, 2013.

Some unmanned drone air strikes have targeted American citizens linked to al-Qaida, including Anwar al-Awlaki and Samir Khan. They were killed in a drone strike in Yemen in September 2011. Neither man had been charged with crimes in the United States.

The paper has resulted in criticism from lawmakers and human rights groups. Critics say it could be used to increase the president's power to use deadly force against suspected terrorists. Democratic Senator Ron Wyden of Oregon says he fears President Obama could be acting as judge, jury and executioner.

"It is the idea of giving any president unfettered power to kill an American without checks and balances that is so troubling. Every American has the right to know when their government believes it is allowed to kill them." 16 seconds – 2.5 lines

On Wednesday the Obama administration told the Justice Department to share classified documents on the issue with the intelligence committees in Congress. A group of senators sent President Obama a request to receive the documents.

The shorter, unclassified white paper was released just before President Obama's nominee to lead the Central Intelligence Agency faced a confirmation hearing. John Brennan is currently the president's counterterrorism adviser. He has been an active supporter of permitting drone strikes against American citizens suspected of terrorist activities.

Mr. Brennan defended the policy during his confirmation hearing Thursday before the Senate Intelligence Committee. He said the strikes were done only when no other method could work to protect the safety of Americans. He also said the government would rather capture terrorists in order to gather intelligence from them.

"I never believe it is better to kill a terrorist than to detain him. We want to detain as many terrorists as possible so we can elicit intelligence from them in an appropriate manner and disrupt terrorist attacks."