This Sunday, people around the world will witness two teams as they battle for the championship of American professional football. The Baltimore Ravens and the San Francisco 49ers are in New Orleans, Louisiana, to prepare for the 47th Super Bowl. Over one hundred million people are expected to watch the game on television, with computers or other devices.

The Ravens were formed in 1996 when the owner of the Cleveland Browns decided to move his team to Baltimore, Maryland. In 2001, the Ravens won their only Super Bowl game. The 49ers were established in 1946 as a member of the All-American Football conference. The team joined the National Football League in 1950. 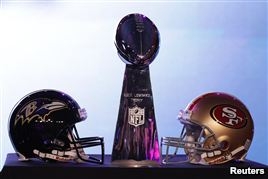 The helmets of the San Francisco 49ers and the Baltimore Ravens sit beside the Vince Lombardi trophy before a press conference ahead of the NFL's Super Bowl XLVII in New Orleans, Louisiana, Feb. 1, 2013.

VOA reporter Jim Stevenson will be going to the game on Sunday.

"This is a really good match up. Most people thought that the 49ers were one of the favorites to reach the super bowl. They have an exceptional defense, explosive offense. Baltimore has always been known for its defense, very tough, physical, hard hitting team."

This Super Bowl game is unusual because the head coaches of the two teams are brothers. Baltimore's John Harbaugh is the older of the two. Younger brother Jim formerly played for several professional teams, including the Ravens. He was a college football coach before moving to the NFL last year to lead the 49ers.

The Super Bowl is not only a popular event to watch, but it also increases economic activity in the United States. Many people hold Super Bowl parties, spending lots of money on food, drinks and activities. Officials estimate the game will bring $434 million to the Louisiana economy and increase the number of visitors to the state.

A major part of the economic activity is coming from large companies that plan to advertise their products on television during ‘commercial' breaks. Companies are spending up to $400 million for a single 30 second advertisement. But businesses would not spend this much money if they did not think it would lead to increased sales. The head of Volkswagen America told the Reuters news agency that the company's recent Super Bowl ads have resulted in a doubling in the size of its business.

This year, companies are recognizing the importance of social media. They know that many people will not only be watching the television broadcast, but will be near their computer or mobile phone. Coca Cola wants people to take part in its advertising. On Sunday, the company will be asking viewers to vote in an online competition between three groups competing for a Coke. Pepsi and Toyota are planning to use personal photographs in their ads.

In the past, Super Bowl ads were closely-guarded secrets. But over the past few years, more and more companies have been making their ads public before the game. This year more than 20 companies have already released their ads. However, not everyone enjoys seeing the ads early. Some people like to be surprised. Because advertising during the Super Bowl is just as competitive as the game itself, some companies could change their ads at the very last minute.

For those of you planning to watch the game, which team do you think will win? You can tell us on Facebook, Twitter or send a comment.

This group has been hard hit by the last 25 years of economic change.
在过去25年里，这个群体受到了经济变革的巨大冲击[^^jZvj2x7*)nZ。

There was no rivalry then between the viewer and the reader.
在那个年代，观众和读者之间没有较量&P)8KbXD3J,La。