Hi everyone. And welcome back to your favorite segment Global Village.欢迎回来你们最爱的板块《小酒馆大世界》。

Before introducing our special guest today, I have a little announcement to make; on October 31st, Happy Hour is going to have an offline theme party in Shanghai, 酒馆要办线下主题派对了。 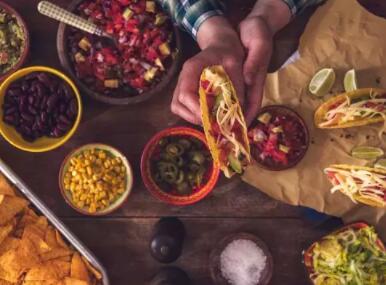 You might think the theme is Halloween, but actually we're doing it with a bit of a twist this year, we're having a Mexican themed Day of the Dead Party. If you have watched a hit movie a few years back, Coco, you would know what it is. 如果你看过几年前大火的动画电影《寻梦环游记》，一定听过墨西哥亡灵节Day of the Dead, and that will be our party theme. And we are very happy to have the opportunity to have the party in a Mexican restaurant called Tacolicious.

And we have the honor to invite the owner of that restaurant to our show today, welcome to the studio Logan.

Thank you. Thank you for having me.

So Logan, can you give us a little bit of a self-introduction about yourself.

Sure, of course. My name is Logan Brouse. I've been in China for 11 years. I've been in the industry for about 20 years now. WOW, I'm getting old, I say I feel older.

I started in Shanghai at a place called The Strip, which is now where the Highline is, on Ascott Hotel; then I went to Mint, I was the club manager at Mint; then I went to Muse On the Bund where I was the lounge bar manager. Then I opened up my first bar called Logan's Punch. And now with two my very good friends, I have a place called Tacolicious which we have a couple of locations in the city.

I wish it was a chain, but we are getting there..

I wouldn't say old, I would say experienced, you obviously got a lot of experience in this industry, but why did you decide to open a Mexican restaurant? Because before you were owning bars, right, or working in bars managing bars.

Yeah, I was only running bars.

So the reason I wanted to open a taco place, I always dream in mind to open a taco place. And I grew up in Santa Fe New Mexico, so we were exposed to…you know, I have my Mexican heritage as well. I was always exposed to…I thought in Shanghai, I wanted to give a little bit of that culture back, so I think it's a very fun and vibrant type of culture. So the situation is I was very fortunate my very good friends our relationships are very tight. We were sitting together at my bar like: you know what we could do, let's make tacos; and we worked really hard on it, and we discovered our own way of making our tacos shanghai style; and so it was a very very lucky fortunate thing that we got our first restaurant, because a friend of mine just had a restaurant to give out. It's like you could take my restaurant over and that's how we started Tacolicious.

Just right time and the right idea I guess, I'm really interested in what you're saying like the taco shanghai style.

First of all, how would you describe your restaurant like the general vibes or who is your target clientele.

So our target clientele is everybody, we try not to just …we don't focus on just being authentic, we want to be delicious, that's our idea. So we really want to focus with our Chinese community that we're in, because we're very happy to be guest here in the country, so our ideas we do stuff like more fusion Mexican food than just straight authentic Mexican food, and that welcomes everybody in.

So we do like Sichuan pork taco or 麻婆豆腐 taco, we do a weekly special which changes every week with a different type of taco style. So we just wanna make it a fun place to eat, it's for families definitely the day, we definitely have a bar program, so there is a bit of a nightlife aspect. I have a lot of returnees are coming back too. So that's the people that did education overseas and now they're back in China, and we find that it's kind of cool. So they're bringing their friends and their families in as well.

Honestly this really sounds like a place, I don't live in shanghai but I'm definitely gonna keep going if I actually were living in Shanghai, but what I'm seeing is shanghai to me, is a place really you can do a lot of the fusion things, like you said, because there's such a mixture like a mixed bunch of people there from different cultural background, different ethnicity, different ideas.

That's the beauty of it, even different parts of China, there're different cuisine types.

So we get to explore that like our chefs at our restaurant get to actually explore their hometowns within the taco format, you know what I mean, sometimes it works really well, sometimes it's kind of like…

A spicy disaster, but it's always fun. You know we're always getting something new and we're always learning from each other like that; and like we'll have guests from all over the world and like this is really cool, I didn't know you could do this; and it's just a… it's a learning experience for all of us in a great one.

Do you take like request like for example, if one of your diners saying that；oh, I have this delicacy from my hometown, maybe you should do this. Do you take that sort of like suggestions, may be in the future you would consider trying to work that into your taco menu?

We do serve all the time, my business partner and chef, he's a Dutch Indonesian, and he's got great ideas about stuff, so a lot of times he'll do like we've done really cool like a Dutch style tacos.

So they have something called bitterballen, and please excuse me, if I'm pronouncing it wrong, but bitterballen is basically… think of a deep fried meat ball, but inside is like 小笼包 where you have a little bit of juice.

So we've done something…they’re very tasty. It's like a bar snack they would have in another…

And you put it in taco.

So you could put it in taco, it's very good, almost think of it like… looks almost like a falafel.

Just give you a visual appearance. But what we've done is we made something called bitter birria. Birria is a shredded meat, the Mexican style shredded meat dish, and so instead of the traditional Dutch filling, we’ve done it with birria.

So we kind of made it our own style, Dutch technique, Mexican taste, and you know it works, it's very very tasty, but it's like the kind of stuff we would do, we want to play with the concepts of how good international food should taste.

So why do you think people like them so much?

I think people, first of all, I think people really like the music and that's a huge connect like Jay Chou put out that Mojito song, and that was fire everywhere, and people like that Latin beat, I think the salsa beat.

And so they're already kind of exposed to the music, and they get to see the food, and I think just the colors are very vibrant, especially the food, but even the paintings and everything.

So I think it's a very fun way to experience something because like you could go salsa dance, you could do this or that in the Mexican restaurant or Hispanic restaurant, you have a lot more flavor I think to it.

So here's the question since you mentioned it's a fun experience. Do you think people go to your restaurant not just to eat a specific food, but also for the general vibes of it, just like the complete experience.

Have a little bit of a kick to it, the exoticness.

Yeah, have a little kick, a little exoticness, you know Tequila never hurts anybody.

So we have a little bit of spicy flavor.

Once you're down a few tequila shots...

The life is good.

You wouldn't mind it so much, but since you grew up in the States, so are Mexican restaurants and bars popular in the States? What is the general impression people have of them?

I think first it's a very good question. We have them everywhere, it's like for me growing up, we had a Chinese restaurant and a Mexican restaurant every town have ever been to my life. So it's part of our culture, it's part of our culinary culture. What I think is with Mexican food, it's not super high end, but it's more of a fast casual comfort.

But we do have it in San Francisco where I was before I was here. You have the Mission District, it was just beautiful bursting with different Mexican Burrito shops everywhere. That's very, very delicious and cool before that in Santa Fe New Mexico, of course we had New Mexican food everywhere.

So it's one of those very culturally, we all know it, we all got our favorite taco place. I mean everybody has heard taco Tuesday. We've all heard Taco Tuesday in the world, so you know how persuasive it is for our culture.

Yeah, but just for our listeners, what is taco Tuesday?

Taco Tuesday, I think almost every household in the states, you just have taco, so that's the day Mom makes tacos for you. So basically, it's at home tacos. In the restaurants, we do our own taco Tuesdays, but I think every Mexican restaurant in the world does the taco Tuesday now, I think the Brown James is trying to…

Yeah, it is fun that you can't have a bad time if you have a taco. like it is a fun to eat food.

Yeah. So in the first half of our talk with Logan, owner of Tacolicious, we talked about his fun Mexican restaurant, and Mexican food in general.

In the next episode, Logan and I are gonna get more into these delicious Mexican treats.

We’ll see you in the next episode.