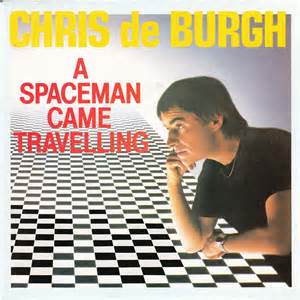 A spaceman came travelling on his ship from afar,
'Twas light years of time since his mission did start,
And over a village he halted his craft,
And it hung in the sky like a star, just like a star

He followed a light and came down to a shed,
Where a mother and child were lying there on a bed,
A bright light of silver shone round his head,
And he had the face of an angel, and they were afraid

Then the stranger spoke, he said "Do not fear,
I come from a planet a long way from here,
And I bring a message for mankind to hear,"
And suddenly the sweetest music filled the air

And it went La La
Peace and goodwill to all men, and love for the child

This lovely music went trembling through the ground,
And many were wakened on hearing that sound,
And travellers on the road, the village they found,
By the light of that ship in the sky, which shone all round

And just before dawn at the paling of the sky,
The stranger returned and said "Now I must fly,
When two thousand years of your time has gone by,
This song will begin once again, to a baby's cry"