The new prime minister of Greece, Alexis Tsipras, and his finance minister, Yanis Varoufakis (above left), toured Europe in search of debt relief and support against austerity. Mr Varoufakis floated a plan to replace Greek debt with bonds linked to GDP growth. For the most part, they met a dusty response; the European Central Bank stopped taking Greek government bonds as collateral. Markets were volatile but seemed hopeful that a deal would eventually be done.

The International Court of Justice in The Hague rejected claims by both Croatia and Serbia that the other was guilty of genocide during their wars of 1991-95, when some 20,000 people were killed. 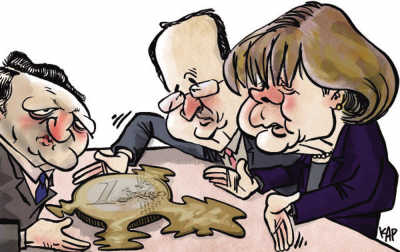 China stepped up controls over the internet. It is now requiring users of blogs and chat rooms to register their real names with internet providers and they must promise to avoid attacking the political system. Censors have also been trying to restrict access to “virtual private networks”, which are often used to circumvent the blocking of politically sensitive websites.

Myanmar accused a senior UN official of interfering in its affairs after she had raised concerns about discrimination against members of the Muslim Rohingya minority. The Rohingya are stateless and have been the target of attacks by members of Myanmar's Buddhist majority.

The coalition government in Australia suffered a resounding defeat in state elections in Queensland. The foreign minister, Julie Bishop, denied that she is planning to oust the prime minister, Tony Abbott, whose popularity has slumped, by mounting a challenge for the leadership of the Liberal Party.

Islamic State militants broadcast their beheading of a Japanese journalist and murder of a Jordanian fighter pilot, whom they burnt alive in a cage. Jordanians, hitherto ambivalent about the bombing of Sunni jihadists, turned against the movement strongly, welcoming King Abdullah's continued participation in the American-led coalition as well as his execution of two jailed militants in revenge.

Egypt's president deported an Australian journalist who had reported for Al Jazeera, ending his incarceration of 400 days for broadcasting “false” news. Meanwhile, Egypt's courts jailed 230 people for anti-government activity, including a liberal activist, Ahmed Douma, who was sentenced to life in prison.

Houthi rebels who have overrun the capital of Yemen, Sana'a, refused to release the country's president, Abd Rabbo Mansour Hadi, and his cabinet from house arrest until a deal is reached on integrating the rebels into the regular army. They said that without a deal, “a revolutionary leadership” under their command would take full control.?

Barack Obama presented a $4 trillion budget that he said is intended “to replace mindless austerity with smart investments”. It includes plans to increase capital-gains tax for top earners from 23.8% to 28%, various levies on business and expanded tax credits for the less well-off. The Republicans who control Congress will not pass it.

Harper Lee said she was “humbled and amazed” that her second novel would be published, 55 years after “To Kill a Mockingbird”. The new book, “Go Set a Watchman”, acts as a sequel, featuring Scout Finch as an adult woman. Ms Lee had written it prior to penning her seminal work, but the manuscript was lost for decades. She says the work is “a pretty decent effort”.

Maria das Gra?as Foster, the chief executive of Petrobras, Brazil's state-controlled oil company, resigned amid a corruption scandal centred on claims that Petrobras solicited billions of dollars in payments from construction companies, some of which were funnelled to political parties. These include the Workers' Party, which is led byDilma Rousseff,Brazil's president. The lower house ofBrazil's Congress has elected as its Speaker Eduardo Cunha, who has often clashed with Ms Rousseff.

In Argentina it emerged that Alberto Nisman, a prosecutor who was found dead in January, had drafted a warrant for the arrest of the president, Cristina Fernández de Kirchner. Mr Nisman had accused the president of obstructing the investigation of the bombing of a Jewish community centre inBuenos Aires in 1994. The arrest warrant was found in a rubbish bin in his home.

Pope Francis declared that óscar Romero, an archbishop from El Salvador who was shot dead while celebrating mass in 1980, was a martyr. This opens the way to his beatification. Earlier popes had regarded the archbishop, who was an exponent of “liberation theology”, as a Marxist.

Rescue workers are digging through the rubble in search of other victims.

Miserable, and unexpectedly lonely, she went in search of Jean-Paul.

Broadly, it makes connections between ideas about healing and how they link to plants.

They have yet to break the link with the trade unions.

The Prime Minister has promised that Israel will play a constructive role.

Melanie promised that she would call them in the morning.