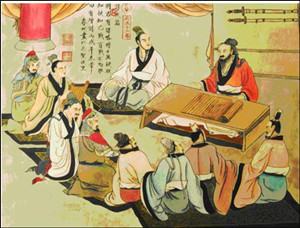 Sunzi said:
Generally in war, the best policy is to take the enemy state whole and intact, to destroy it is not. To have the enemy's army surrender in its entirety is better than to crush it; likewise, to take a battalion, a company or a five-man squad intact is better than to destroy it. Therefore, to fight a hundred battles and win each and every one of them is not the wisest thing to do. To break the enemy's resistance without fighting is.

Thus, the best policy in war is to thwart the enemy's strategy. The second best is to disrupt his alliances through diplomatic means. The third best is to attack his army in the field. The worst policy of all is to attack walled cities.

Attack a walled city only when there is no alternative. For it takes at least three months to make mantlets and shielded vehicles ready and prepare the necessary arms and equipment; for it takes another three months to build the earthen mounds for soldiers to ascend the walls. The commander who loses his impatience orders his troops to assault like swarming ants, with the result that one third of his men are slain and the city remain untaken. Such is the calamity of attacking walled cities.

Therefore, he who is skilled in war subdues the enemy's army without fighting. He captures the enemy's cities without assaulting them. He overthrows the enemy kingdom without prolonged operations in the field. By taking all under heaven with his "whole and intact strategy," he wins total victory without wearing out his troops. This is the method of attacking by stratagem.

Consequently, the art of using troops is: when you outnumber the enemy ten to one, surround him; when five to one, attack him; when two to one, divide him; and if equally matched, stand up to him. (tr.: Another version of the text reads "when two to one, stand up to him; and if equally matched, divide him.") If you are fewer than the enemy in number, retreat. If you are no match for him, try to elude him. For no matter how stubbornly a small force may fight, it must in the end succumb to greater strength and fall captive to it.

The commander is the country's bulwark. His proficiency in war can make the country strong, his deficiency makes it weak.

There are three ways by which a sovereign may bring disaster to his army:

One, he arbitrarily orders his army to advance or retreat when in fact it should not, thus hampering the initiative of the army.

Two, he interferes with the administration of the army when he is ignorant of its internal affairs, thus causing confusion among the officers and men.

Three, he interferes with the officers' command, unaware of the principle that an army should adopt different tactics according to different circumstances. This will create misgivings in the minds of the officers and men.

When an army is confused and fraught with misgivings, neighboring states will take advantage of the situation and attack. This will disrupt the army and help the enemy to win.

Therefore, there are five factors to consider in anticipating which side will win, namely:

The side which knows when to fight and when not to will win;

The side which knows the difference between commanding a large army and a small army will win;

The side which has unity of purpose among its officers and men will win;

The side which engages enemy troops that are unprepared with preparedness on its own part will win; and

The side which has a capable commander who is free of interference from the sovereign will win.

Bearing these points in mind, one is able to forecast victory in a war.