This is Scientific American's 60-second Science. I'm Karen Hopkin.
When we think about pets, we often consider dogs to be overly attentive and cats, well, a bit more aloof. But a new study shows that cats can become attached to their humans—and will turn to that person for comfort in times of stress. The findings a-purr in the journal Current Biology.
Although kitties are a popular pet—more people own cats than dogs here in the U.S.—there are few studies that examine how the furtive felines feel about their owners.
"There has actually been very little research into the cat-human bond. Especially when we compare it to the number of research studies with dogs and humans."
Kristyn Vitale, a postdoctoral scholar at Oregon State University.
To explore the cat-caregiver connection, Vitale and her colleagues turned to a test that's been used to assess bonding behavior in puppies, apes and even infants.
The researchers would show a cat and its owner to an unfamiliar room and leave them there for two minutes—at which point the owner would depart, leaving the cat on its own.
"We know that human infants' attachment behavior toward their parents is heightened in response to a frightening or novel situation. So in this case, the experience of the cat being in the novel room alone acts as our strange situation and allows us to observe if the cat directs any attachment behaviors to the owner when they then come back to the room." 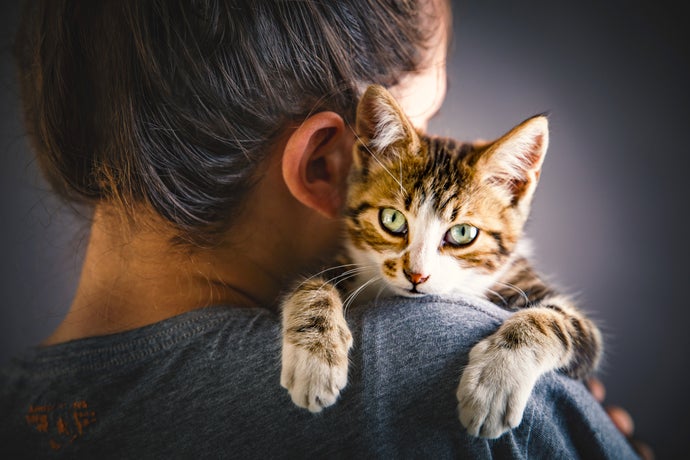 When the owners returned, Vitale and company would observe their reunion. And they saw that the felines displayed a variety of cat-itudes.
"So some cats greeted their owner, and then they returned to exploring the room while periodically going back to their owner for attention."
These kitties are apparently secure enough in their relationship that some quick reassurance was all they needed before continuing to purr-sue their purr-usal of the room.
On the other paw, some were real scary cats:
"Other cats behaved in an insecure way and excessively clung to their owner's side."
And then there were the cats that lived up to their reputation for supercilious standoffishness:
"Other cats avoided their owner when they returned to the room. These secure and insecure patterns of behavior are actually the same as what we observe between dogs and their owners and even human infants and their caregivers. In all three of these populations, the majority of individuals are actually securely attached to their caregivers, indicating similarities across these species."
Although snubbing is generally considered classic cat conduct:
"The majority of cats in the study, around 65 percent, actually use their owners as a source of security."
Why, one could even describe those cat-human relationships as dogged.
Thanks for listening for Scientific American's 60-second Science. I'm Karen Hopkin.

重点讲解：
1. on one's own 单独地；独自地；
He lives on his own.
他独自一人生活c*it8)P5I33q&(q9b_nZ。
2. cling to 缠住；依附；
I was terrified he would leave me, so I was clinging to him.
我害怕他会离开我，所以缠着他不放VO0##+B=Qx8DPBKF7P4。
3. live up to 遵守（诺言）；符合，不辜负（期望）；
The Festival aims to live up to its reputation as a trail-blazing event.
该艺术节志在不虚负其先锋性活动的声名Su-GU4RMqxy。
4. the same as 与…一样；
I mean, it's a relationship, the same as a marriage is a relationship.
我的意思是它是一种人际关系，就如同婚姻也是一种人际关系一样2H%%BmZ8T*。