BBC News. Hello, this is Jerry Smit. Violent protests have spread across the United States over the killing by police of an unarmed African-American man. The unrest has had dozens of cities and a state of emergency has been declared in Georgia after an evening of violence and arson in the city of Atlanta. In Minneapolis where George Floyd was killed, protesters have defied an overnight curfew. David Willis reports. From New York and Washington DC in the east to San Diego and Los Angeles in the west, anger spilled onto the streets as protesters clash with police. The White House went briefly into lockdown as protests over George Floyd's death spread to the US seat of government. Some protesters attempted to scale the walls, others burned American flags. In Minneapolis, the scene of three nights of protest, the promise of hundreds of national guard officers taking to the streets didn't seem to materialize and there were unconfirmed reports of further looting. One policeman has been charged with Mr. Floyd's murder, but the protestors want the other officers involved to face justice too.

The Facebook founder Mark Zuckerberg has said he has a visceral negative reaction to President Trump's divisive and inflammatory rhetoric on the protests in Minneapolis. But Mr. Zuckerberg said Facebook was committed to free expression. His comments came after Twitter hid a tweet by Mr. Trump and posted a warning saying it glorified violence. 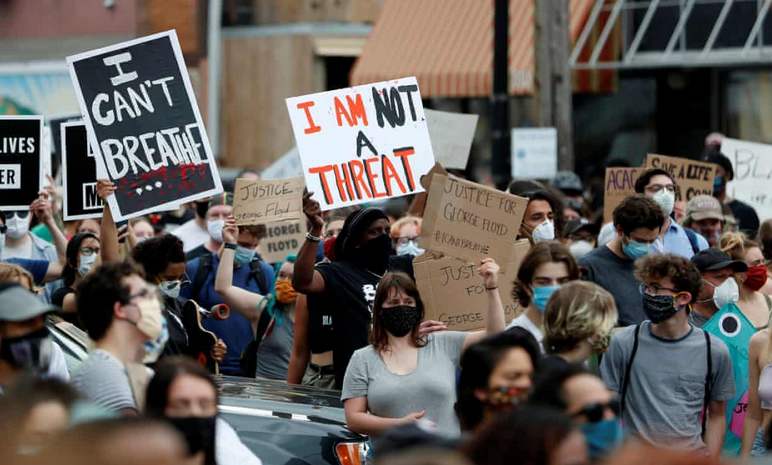 India has recorded its biggest single day jump in coronavirus cases with nearly 8000 new infections. Here is Jill McGivering. The number of newly confirmed cases is growing dramatically day by day. This is the biggest increase so far, but the day before, there were for the first time, more than 7000 new cases, at every day for the previous week, more than 6000. The apparent surge comes as India's slowly emerges from its national lockdown put in place in late March. It's caused hardship, especially for migrant workers stranded without wages. This month, the authorities have helped 10 million travel home. Another complication is India's low testing rate, which leaves the full picture unclear.

Brazil has reported nearly 27000 cases of COVID-19 in the past 24 hours, a new daily record. Katy Watson reports from Sao Paulo. There's no sign yet of Brazil's coronavirus outbreak slowing down. It now has the 5th highest death toll in the world, and yet again posted a record number of new cases, nearly 27, 000 in one day. The total number of confirmed infections is expected to pass half a million in the next few days. But Brazil's president remains silent on the pandemic. These past few days, he's been more focused on a supreme court investigation, looking into allegations of fake news among his supporters, a move that he said is politically motivated. World news from the BBC.

1.But Mr. Zuckerberg said Facebook was committed to free expression.

All of us, myself included, had been totally committed to the Party
我们大家，包括我本人在内，一直都对党绝对忠诚Q47GUjACOvo#w]X.。

2.One policeman has been charged with Mr. Floyd's murder, but the protestors want the other officers involved to face justice too.

He's charged with conspiracy, misapplication of funds and other crimes.
他被控涉嫌阴谋破坏、滥用资金以及其他几项罪行wF&q2ybj-!]5HDVKKh。

3.These past few days, he's been more focused on a supreme court investigation, looking into allegations of fake news among his supporters, a move that he said is politically motivated.

They set up a working party to look into the issue.
他们设立了一个特别工作组来调查这个问题%SXy53hA-=AS。