Hello, this is David Austin with the BBC news. At least 40 people have been killed in a crush during the funeral of the Iranian General Qasem Soleimani, who was killed in a US airstrike on Friday. More than 200 people have been injured. Huge crowds had been moving through his home city of Kerman. Here's the BBC's Jiyar Gol. The official announced that they have postponed the burial today in his hometown. Don't forget Qasem Soleimani started as a humble construction worker in Kerman. I think it's difficult to say all those people out there in the street are supporting the regime. No doubt he was a popular among many people, but also don't forget the school has been closed, the government employees, they have to go, otherwise they will lose their job. The military personal are going out. The government are using every tool in its disposal to gather and collect people for this funeral.

The Iraqi commander who was killed in the US attack alongside General Soleimani is being buried in Iraq's holy city of Najaf today. Abu Mahdi al-Muhandis traveled to meet the general at Baghdad airport when the air strike hit on Friday. Al-Muhandis was the deputy head of an Iranian-backed Shiite militia group in Iraq. He was a key player behind Iraq's 2017 offensive against the Kurds. 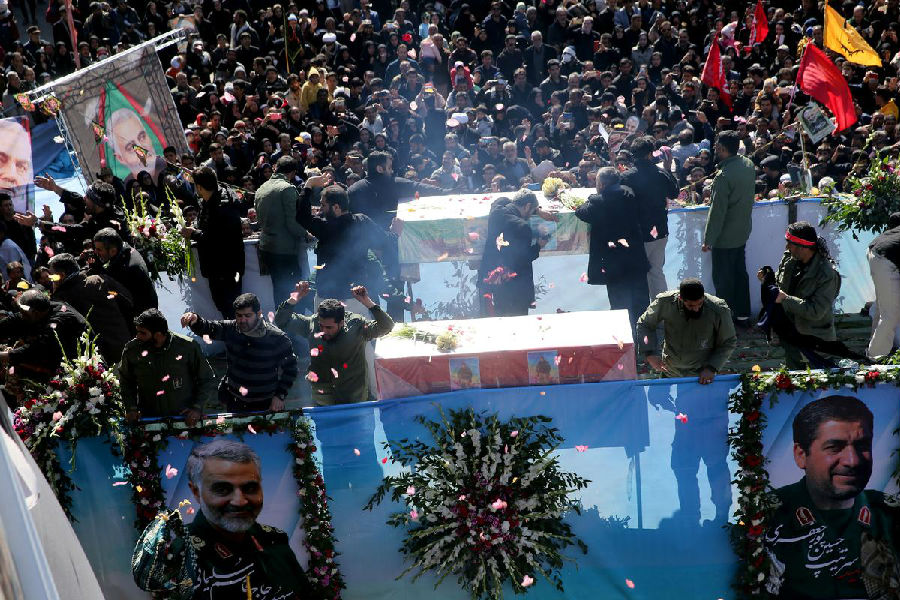 Iran's Foreign Minister Mohammad Javad Zarif has said the end of America's presence in the Middle East has begun. Addressing a forum of Persian Gulf countries, Mr. Zarif said a response to Washington's killing on Friday of General Soleimani would come when and where it would hurt the United States most. The head of Iran's Revolutionary Guards, Hossein Salami said that Iran was considering 13 scenarios to avenge General Soleimani's assassination. Addressing a large crowd, he said the US knew where the targets were. We say to our enemy, we will take revenge. We will burn the places they love if they make another move.

A British teenager convicted of lying about being gang-raped in Cyprus has been given a 4 month suspended prison sentence. The 19-year-old was found guilty of causing public mischief after attracting her original statement. She said she was forced to do so by Cypriot police, which they've denied. Her lawyer said that they would appeal. The British foreign minister said he been in touch with the Cypriot government about her case. I'm relieved that this vulnerable young lady will now be returning home to begin the process of recovery, given all that she's been through. I spoke to her mother on Friday. I understand quite how much she's been through, how much the family's been through. And so my first priority, my first concern has been her welfare. We will be following up on some issues in relation to the case. I spoke to the Cypriot foreign minister about that. World news from the BBC.

1.A British teenager convicted of lying about being gang-raped in Cyprus has been given a 4 month suspended prison sentence.

He has been blacklisted since being convicted of possessing marijuana in 1969.
他自从1969年因持有大麻而被定罪后就被列入了黑名单CtJVlOS!hOP^WVc。

2.We say to our enemy, we will take revenge.

It is time to find out who has done this to you and take revenge!
是时候去解开谜底了展开复仇了！

3.She said she was forced to do so by Cypriot police, which they've denied.

He has been forced to adjust his schedule.