BBC news. Hello, I'm Jerry Smit. President Trump has threatened to hit 52 potential Iranian targets should Tehran attack any American citizens or assets in retaliation for the killing of General Qasem Soleimani in Iraq. Mr. Trump warned that such targets, which included important cultural sites, will be hit very fast and very hard as would Iran itself. The body of General Soleimani has arrived in Iran ahead of his burial on Tuesday. Lina Sinjab reports. The body of major General Qasem Soleimani has arrived in the province of Ahwaz where the three-day funeral procession will start, moving to Tehran before the final burial in his hometown of Kerman. Iran's supreme leader Ali Khamenei is expected to lead the prayers in Tehran tomorrow. Thousands of people have taken to the streets in Iran and Iraq mourning a man they see as a hero.

An Iranian-backed militia group warned Iraqi forces to keep away from American bases in a signal of reprisal attacks to come. The US-led coalition says rockets which landed last night in Baghdad is fortified Green Zone, and neither base used by coalition troops did not cause any casualties. 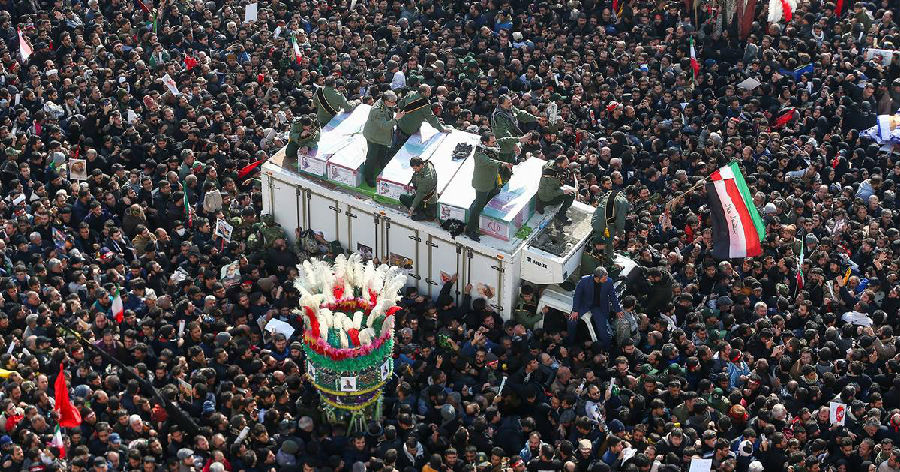 The Somali Islamic group al-Shabab has attacked a naval base in the Kenyan Lamu county which holds US and Kenyan troops. The attack at Simba base in Manda Bay happened just before dawn. One government official, commissioner Irungu Macharia said a security operation was still ongoing. He refused to confirm any casualties.

Japan says it will tighten its immigration and departure procedures after the former head of Nissan Renault, Carlos Ghosn, caused a shock by jumping bail and escaping to Lebanon. In Tokyo, the first public comments on his flights, the Justice Minister called it apparently illegal. As the Australian bush fire crisis continues, the death toll has risen to 24.

In Cooma, New South Wales, the fire crisis was compounded by a flood disaster when a large tank burst and released 4.5 million liters of water. Cars were swept away and homes were filled with mud. Local authorities said Sunday started with milder conditions, including some rainfall in New South Wales and the neighbouring Victoria state. But firefighters have faced vast burning fire fronts. This report from Chana Helio. Everywhere I look right now on the highway, it's just engulfed in this blanket of very, very heavy smoke. It's like someone has painted this whole area with a dust filter. You can hardly see the trees or the houses just opposite me. And it's really, really hard to breathe. It hits you right in the throat. And that's just really been the story of the Australian summer. As these fires continue to burn, people's lives are affected, you know in vast amounts of the land even further away from the fires. BBC news.

1.The body of General Soleimani has arrived in Iran ahead of his burial on Tuesday.

I tried to think about all the problems that were ahead of me tomorrow
我试图考虑明天我将面临的所有问题!.i2qgv)(xlQ。

2.Cars were swept away and homes were filled with mud.

The media have been filled with tales of horror and loss resulting from Monday's earthquake.
媒体上尽是星期一发生的地震所带来的恐惧和损失的报道.Zm*hF5QwlVTIad@px。

3.The body of major General Qasem Soleimani has arrived in the province of Ahwaz where the three-day funeral procession will start.

Their grief turned to hysteria when the funeral procession arrived at the cemetery
当送葬队走到墓地时，他们更加悲恸欲绝pPLP&;FUu~qf~7CN。