Hello, I'm Daniel Yavowska with the BBC News. North Korea has carried out what it said was a crucial test as it works to bolster its nuclear capabilities. Pyongyang didn't say what was being assessed, but it appears to be the second test in a week at the Sohae Satellite Launch Site, which North Korea said last year would be permanently dismantled. From Seoul, here is Laura Baker. The North Korean's statement described the test as part of efforts to strengthen the regime's nuclear deterrent. It took place over a seven-minute period on Friday, which could mean it was another rocket engine test. It would be the second such test at Sohae in a week, a site Donald Trump once claimed had been dismantled as part of a deal between him and the North Korean leader. Earlier this month, a senior North Korean official threatened to deliver a Christmas gift to the US which raised concerns that Pyongyang is planning to escalate its confrontation with Washington.

Protests have continued for a second day in the east Indian city of Calcutta amid anger over a controversial new citizenship law. The law paves the way for migrants from neighboring countries to claim citizenship if they face religious persecution but doesn't apply to Muslims. Our south Asia regional editor Jill McGivering reports. In Calcutta, for a second day, protesters attacked trains and buses, vandalized railway stations and blocked highways with burning tires. The state's Chief Minister, Mamata Banerjee who opposes the new law, has announced plans for protest rallies early next week. She's one of several state leaders who says she won't implement the law despite orders from central government that she must. In the northeastern state of Assam, where two people were killed in protests on Thursday, queues formed at shops and petrol pumps, as curfews there were eased. 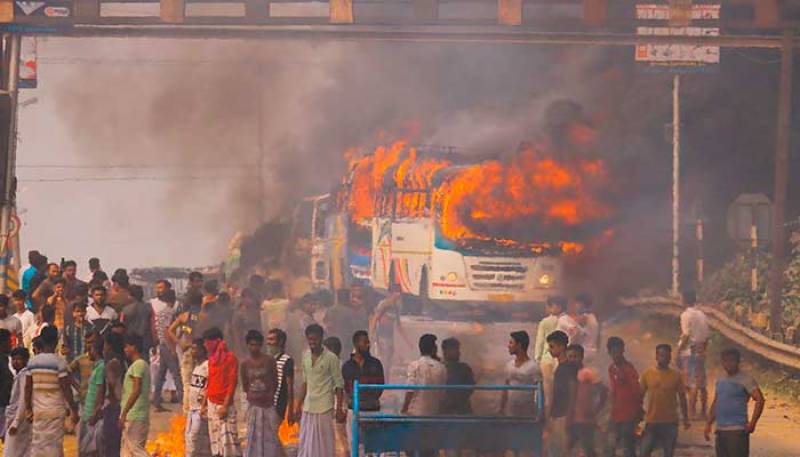 Negotiations at the UN climate summit in Madrid have been extended after officials failed to decide how to implement the 2015 Paris Agreement. The talks were due to end late on Friday that deadlocked on a number of issues, including tougher targets for cutting greenhouse gas emissions, financial aid for countries most at risk and rules on carbon trading. There have been daily protests in Madrid by environmental activists. This demonstrator warns the summit is not making enough progress. They say they're making gains but we and the scientists don't see it that way. Every day, we see that more species are becoming extinct. We see that temperatures are rising, but also see they are doing nothing to try to resolve this.

Riot police in the Chilean capital Santiago have again clashed with anti-government protesters. On the day, the UN accused the police and army of committing serious human rights violations. Protesters set fire to barricades while police used water cannon to disperse them. World news from the BBC.

1. The talks were due to end late on Friday that deadlocked on a number of issues.

In part this attitude was due to fear of trade union and employee reactions.
在某种程度上，这一态度是由于害怕工会和雇员的反应=KQjRfxAg#G=fSQ=。

2.Riot police in the Chilean capital Santiago have again clashed with anti-government protesters.

They will televise both legs of Leeds 'European Cup clash with Rangers.
欧洲杯利兹联队与流浪者队的两场争夺战都将进行电视转播k8Q5stZC!vK%#4;QO。

3.The North Korean's statement described the test as part of efforts to strengthen the regime's nuclear deterrent.

She copies the true artist's signature as part of a painting, as do most copyists.
像大多数临摹者一样，她也把原画家的签名临摹到画上U(W)rxW2EqqKz。