BBC News. Hello, I'm Jerry Smit. Brisk voting has been reported across Sri Lanka where millions of people have lined up to cast their ballots in a presidential election. In a tight race between the former defense secretary and a housing minister, the turnout of ethnic and religious minorities could be key. From Colombo, Jill McGivering. So far, the elections have been largely peaceful, although police in the mostly Tamil north accused the army of setting up illegal road blocks. And in the northwest, a convoy of buses taking Muslims to vote came under attack. The concern in both cases is that Sri Lanka's minorities may be deterred from voting and their role in this election could prove crucial. The contest between the two front-runners Gotabaya Rajapaksa and Sajith Premadasa is too close to call. If either failed at first to secure more than half the vote, second preferences could come into play.

The Duke of York, Queen Elizabeth's second son has admitted he let the side down by continuing to associate with the late Jeffrey Epstein, a convicted sex offender. In an interview with the BBC, the Prince was also asked about an American woman who alleges she was forced to have sex with him. Here's Jonny Dymond. In 2001, Prince Andrew was photographed with his arm around the bare midriff of a young woman, Virginia Roberts. She would later allege that she had sex with Prince Andrew that night aged seventeen and on two subsequent occasions. In the interview, the Prince says he has no recollection of ever meeting with Roberts. This year, video emerged of Prince Andrew inside the house of Jeffrey Epstein in 2010, two years after Epstein had been convicted and imprisoned for child sex offenses. 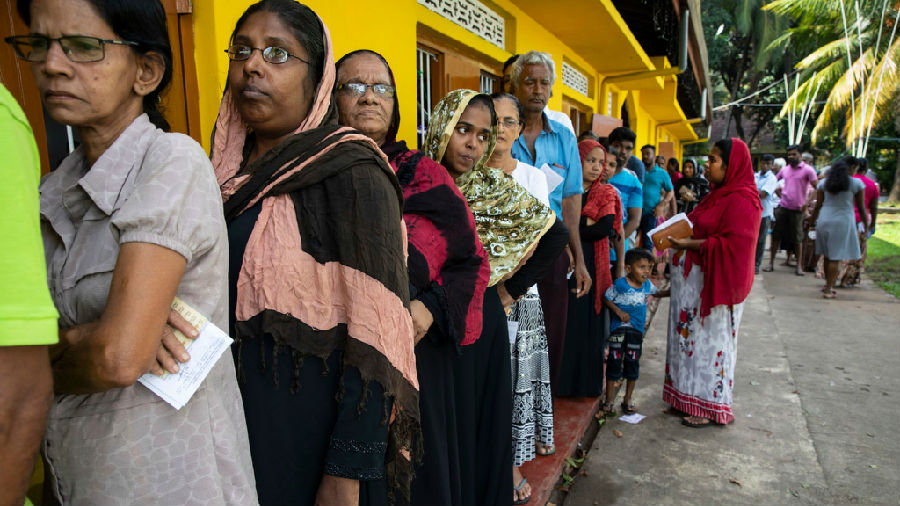 Police in France are on alert as supporters of the Yellow Vest Movement begin further protests on the first anniversary of their weekly anti-government demonstrations. A number of metro rail stations have been closed as a precaution in Paris, where a march is planned. The city saw serious rioting and clashes with police during some of the early Yellow Vest protests. The movement grew amid anger over fuel prices and the cost of living.

A planned prisoner exchange between the Afghan government and the Taliban has failed to materialize. Three influential Taliban members were expected to be released as part of a deal to free two Western university professors. Here's Secunder Kermani. On Tuesday, President Ashraf Ghani addressed the nation saying his government would be releasing three Taliban members, including Anas Haqqani, the brother of the deputy leader of the militant group. It was expected that the men would be sent to Qatar, where the Taliban's political office is based. However, a Taliban spokesman said the men had been returned to prison. No timeline on the expected release of the American and Australian professors Kevin King and Timothy Weeks had ever been made public. It's not clear why the planned exchange has so far failed to materialize.

1.If either failed at first to secure more than half the vote, second preferences could come into play.

2.The Duke of York, Queen Elizabeth's second son has admitted he let the side down by continuing to associate with the late Jeffrey Epstein, a convicted sex offender.

I'd advise you not to associate with him, he's bad egg.
我奉劝你不要和他交往，他是一个卑鄙小人;*RM7[zgos0YvL0nUy。

3.Three influential Taliban members were expected to be released as part of a deal to free two Western university professors.

Every member contributes to the rap, singing either solo or as part of a rap chorus.
每个成员都参与到说唱中来，或者独唱，或者表演说唱乐中的和声部分bjqQyg%J;l@z3NqU_h。