The authorities in Zimbabwe say at least two hundred elephants have died due to a lack of food and water as a result of severe drought. Last month, they said fifty-five had died. Zimbabwe is thought to be home to eighty thousand elephants around a fifth of Africa's total. Will Ross reports.

In an effort to prevent more of the elephants dying, a spokesman for Zimbabwe's Parks and Wildlife Management Authority said there were plans to move six hundred of the animals from Save Valley Conservancy in the southeast of the country to three other national parks. He said until the rains came, there'd be more deaths due to loss of habitat caused by the severe drought. Giraffe, lions, buffalo and antelope will also be moved in what the authorities describe as the biggest relocation in the country's history. Park officials say there are too many elephants in Zimbabwe. Animal welfare groups have criticized recent reports that dozens of young elephants have been flown from Zimbabwe to zoos in China. 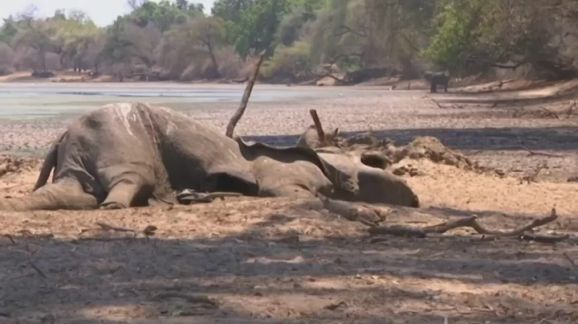 Ugandan police have raided a bar in Kampala popular with the gay customers, arresting one hundred and twenty people. The authorities say police seized drugs during the operation. A police spokesman said they were not aware that members of the LGBT community were among the clientele. The Ugandan government has denied that it plans to introduce new legislation targeting the LGBT community.

Turkey says it has started to deport suspected Islamic State militants to their countries of origin. They are thought to have been captured recently in Syria. Alan Johnston reports.
The Turkish authorities say an American jihadist has already left the country and that seven German fighters will be repatriated on Thursday. Eleven French and two Irish citizens are also being processed. There's been no word yet from these countries regarding the deportations. But French sources have indicated that the Turks have been sending militants back to France quite frequently under a 2014 agreement. The Turks have been critical of western states that have been reluctant to take back suspected IS members who are being held in Turkey.

Commemorative events have been taking place around the world to mark the signing of the Armistice to end the First World War 101 years ago. In Paris, French Horse Guards paraded at the Champs Elysees to the Arc de Triomphe, where President Emmanuel Macron led events attended by wartime veterans. In Britain, people assembled at the Cenotaph in London, while a two-minute silence was observed at many stations, schools and workplaces across the country.

1.Ugandan police have raided a bar in Kampala popular with the gay customers, arresting one hundred and twenty people.

Many treasures were lost when the tombs were raided in the last century.
上世纪这些坟墓遭到偷盗，很多财宝都失踪了^O5D^]35SBSDU]*。

2.and that seven German fighters will be repatriated on Thursday.

The refugees were forcibly repatriated.
难民被强制遣送回国C)&7wH%wxxP6-~vy。