Hello, this is David Austin with the BBC news. Polls have opened in Spain's fourth general election in as many years. The Socialist acting Prime Minister Pedro Sanchez is hoping to secure the majority that eluded him last April. Here's Guy Hedgecoe. Although Mr. Sanchez as Socialists who have been leading polls, it is likely they will again fall short of a majority and will need the support of other parties in order to govern. But in Spain's current political climate, that could be a major challenge. The country has been polarized by the Catalonia crisis, which has deepened in recent weeks and the issue has dominated the election campaign. The far-right Vox, which takes a particularly tough line against the independence cause, appears to have been the main beneficiary of the turmoil.

Just days before he leaves office, Sri Lanka's president has granted a controversial pardon to a death row prisoner convicted of killing a Swedish teenager in 2005. Jude Jayamaha from a wealthy high-profile family walked free from prison following President Maithripala Sirisena's highly unusual decision. Some legal experts have questioned how out of thousands of prisoners the pesident chose clemency in this particular case and they argued the pardon undermines the rule of law. Ordinary Sri Lankans have also expressed their outrage on social media. 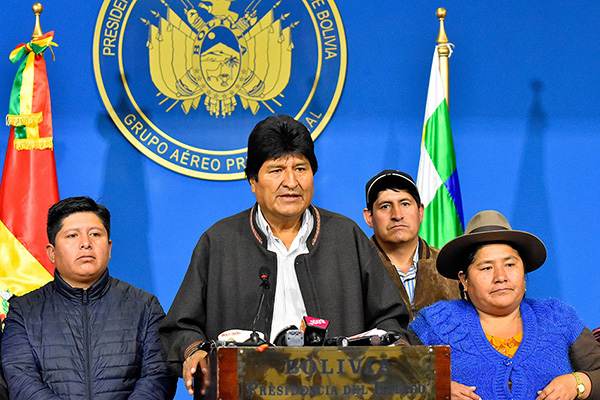 There have been violent confrontations in Bolivia between supporters and opponents of President Evo Morales, as tension mounts over the disputed presidential election. Bolivia's armed forces have said they won't intervene and the police in most cities have sided with the opposition. James Read reports. With the police in most cities siding with opposition protesters and the armed forces making clear they won't intervene, Bolivia is rapidly descending into chaos. President Morales says the homes of the governors of two regions have been burned down along with his sister's house in the city of Aurora. Opposition activists say convoys carrying protesters to La Paz, the seat of government, have been blockaded and attacked. Both sides have targeted broadcasters sympathetic to their opponents. Mr. Morales is reported to be in the lowland region of Chapare where he began his political career as the leader of a coca growers union.

There's no sign of a letup in eastern Australia where firefighters are continuing to battle numerous bush fires in the states of New South Wales and Queensland. Ben Shepard from the New South Wales Fire Service has warned that the situation is likely to get worse in the coming days. We have some seventy fires that are burning. More than thirty fires of those are yet to be brought in control. But we are talking about a massive area here now that we are dealing with some six or seven hundred thousand hectares. We literally got firefighters that they're protecting properties at the moment being supported by water bombing helicopters. But our real concern is actually moving into Tuesday where we are expecting temperatures in the high thirties, early forties. World news from the BBC.

1.It is likely they will again fall short of a majority and will need the support of other parties in order to govern.

If we fall short of seeds and nuts, we'll need these berries to fall back on.
要是种子和坚果不够的话，我们还要靠这些莓果过冬5c1gnHno~uBa)jfenvz。

2.The far-right Vox, which takes a particularly tough line against the independence cause, appears to have been the main beneficiary of the turmoil.

The president's tough line is, however, buttressed by a democratic mandate.
然而，总统推行的强硬路线受到了民主党发布的训令的支持2Ssfv[)JXO,XSTSWSDWN。

3.President Morales says the homes of the governors of two regions have been burned down along with his sister's house in the city of Aurora.

Six months after Bud died, the house burned down
巴德死后6个月，这座房子被烧毁uidK61!DxY.kNcmj5。