This is the BBC News. Hello, I'm Jonathan Izard.

There's renewed impetus to the impeachment investigation into President Trump with congressional committees ordering the Secretary of State Mike Pompeo to turn over all Ukraine-related documents within a week. The House has also summoned five state department officials. From Washington, here's David Willis.

The subpoena demands that Mike Pompeo release documents relating to a telephone conversation between President Trump and his Ukrainian counterpart Volodymyr Zelensky in July this year, including records related to the Trump administration's decision to withhold aid money for the Ukraine. At the time of that phone call in which President Trump repeatedly urged Mr. Zelensky to launch an investigation into the conduct of Mr. Trump's democratic rival Joe Biden, whose son had been doing business in the Ukraine. Nearly four hundred million dollars of aid money was being withheld. US media are reporting that a number of other conversations Mr. Trump held with world leaders have been classified. The Washington Post said access to remarks made to the Russian foreign minister in the Oval Office in 2017 had been restricted. Mr. Trump is reported to have said he was not concerned by Russia's meddling in the presidential election. The New York Times said conversations with President Putin and the Saudi Crown Prince also removed to a top security server. The White House has not yet commented on the allegations. 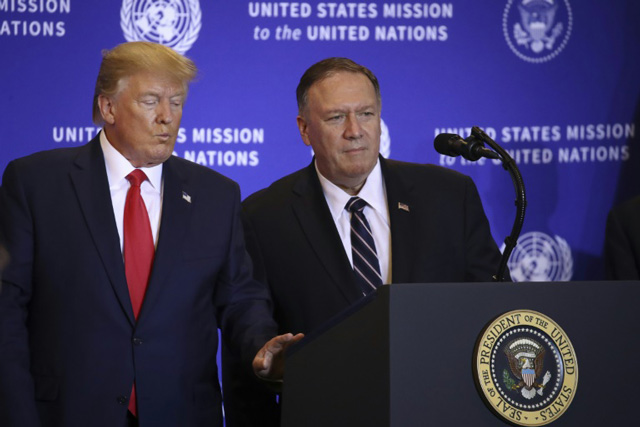 Afghans are voting in a presidential election against a background of violence. There have been blast in a number of cities including the capital. Fifteen people were reported wounded in an explosion at a polling station in Kandahar. Martin Patience has the latest from Kabul.

The Afghan government has deployed tens of thousands of security forces to protect polling stations that Taliban has vowed to target. It's likely that huge number of voters will choose to stay at home, calling into question the legitimacy of this election. The two main candidates are President Ashraf Ghani and chief executive Abdullah Abdullah. They've shared power for the past five years in a so-called unity government after the previous election was overwhelmed by accusations of ballot stuffing.

Downing Street has reacted angrily to the referral of the British Prime Minister Boris Johnson to a police watchdog calling the move nakedly political. The local government authority for London has asked the watchdog to assess whether Mr. Johnson should face a criminal investigation over his relationship with an American businesswoman. It's alleged that when Mr. Johnson was Mayor of London, Jennifer Arcuri was allowed to go on overseas trade missions for which she had previously been turned down and that she received thousands of dollars in sponsorship money. The prime minister denies any wrong doing.

More than forty people have been killed in flooding caused by torrential rains in the northern Indian state of Utter Pradesh. Officials say most people died when walls and roofs collapsed. The Ganges is flowing above the danger mark in some parts of the state.

This is the world news from the BBC.

1.There's renewed impetus to the impeachment investigation into President Trump

This decision will give renewed impetus to the economic regeneration of east London.
这一决定会给东伦敦的经济复苏带来新的推动力=DBwH1ir7(q。

He was summoned to appear before the magistrates.
他被传唤在地方法院出庭)#bPooVt|y]KZNG-。