BBC News. Hello, I'm Jerry Smit. The Interior Ministry in Saudi Arabia says drone attacks have hit two major oil facilities in the east of the country. A statement said they started fires at the Abqaiq Plant as well as the Khurais oil field about a hundred kilometers away. Here is Lina Sinjab. The two attacks hit the Aramco oil facilities at Abqaiq and Khurais, two of the largest oil fields in the world. Saudi state media said the fires were brought under control. They did not say who was behind the drone attacks, but previous attacks on oil tankers were blamed on Iran. Iranian-backed Houthi in Yemen have also been firing rockets at Saudi Arabia in retaliation for the Saudi-led bombing campaign against them. And in the past few minutes, Yemen's Houthi rebels have said they were behind the attacks which involved ten drones.

The funeral is taking place at the former President of Zimbabwe Robert Mugabe who died in Singapore last week. Supporters in the stands danced and sang as dignitaries took their seats at the national sports stadium in Harare. The presidents of South Africa and Kenya are among nearly twenty current and former African heads of state attending the ceremony. Representatives of China, Iran, Venezuela and Cuba are also reported to be present. Many Zimbabweans are reported to have shown the ceremony in protest at the repression which marked Mr. Mugabe's later years. 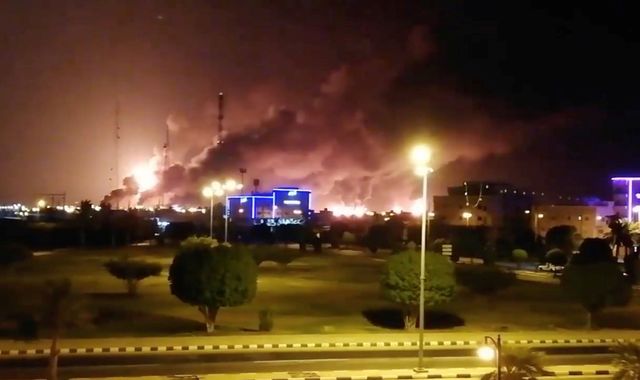 Italy has assigned a safe port for a charity-run ship with eighty-two migrants aboard six days after the first of them were rescued. The Ocean Viking is now heading for Lampedusa following an agreement with several other European Union countries to redistribute those on board. Here is Danny Eberhard. Italy's new coalition has signaled a different approach on migration,
gone of the stride and declarations of the former Interior Minister Matteo Salvini. He'd routinely blocked access to charity-run migrant vessels. Prime Minister Giuseppe Conte said he's not interested in propaganda, a dig at Mr. Salvini. But it's not a return to open ports. Italy remains insistent on European solidarity in terms of redistributing rescued migrants and not just on an ad hoc basis. The EU appears to be inching towards a mechanism for this, even if initially, a temporary partial one.

The UN Secretary General Antonio Guterres says the devastating hurricane which hit the Bahamas demonstrates the need to address climate change. Mr. Guterres on a fact finding visit to the islands said in the present era of climate crisis, hurricane and storms were turbocharged, happening with greater intensity and frequency. In relation to islands of the Caribbean, one thing is clear, climate change is already here. It's not a threat to the future, it's happening and it's happening with devastating impacts and so it is absolutely essential to have a very relevant investment in resilience and adaptation. World news from the BBC.

1.In relation to islands of the Caribbean, one thing is clear, climate change is already here.

in relation to 关于

The money he'd been ordered to pay was minimal in relation to his salary.
他被要求支付的金额与他的薪水相比微不足道JZ3gtm@UGkga&c=_~7J0。

2.The Ocean Viking is now heading for Lampedusa following an agreement with several other European Union countries to redistribute those on board.

With another day's work in the can, Philip is happy to leave the open countryside and head for his London flat.
又干完了一天的活，菲利普满心愉悦地离开了广袤的乡村，前往自己位于伦敦的公寓0e(BOcx(d*。

3.Iranian-backed Houthi in Yemen have also been firing rockets at Saudi Arabia in retaliation for the Saudi-led bombing campaign against them.

The shooting may have been in retaliation for the arrest of the terrorist suspects.
枪击事件可能是对逮捕嫌疑恐怖分子进行的报复行动1l9YVJxgnJfN.Qw9KF。