Hello, this is David Austin with the BBC News.

Britain's Prime Minister Boris Johnson has challenged the leader of the opposition Labor Party to go to the polls if parliament passes legislation seeking to block the possibility of leaving the European Union without a deal. Here's Norman Smith.

Boris Johnson today struck a defined note. He again warned MPs he would not back down over his pledge to leave the EU, do or die on October the 31st and he accused the Labour leader of being fret following his support for what Mr. Johnson called more dither and delay. The Prime Minister is also facing a further series of reverses this evening with MPs expected to approve legislation to avert no-deal and Labour poised to deny Mr. Johnson the two thirds majority he needs to trigger a snap election.

Two former British investment bankers are being tried in Germany, accused of a multi-million dollar tax fraud. It's the first criminal trial to come to court in a complicated share trading scandal known as cum-ex that said to have cost governments across Europe billions of dollars. It involved numerous trades of stocks close to the time that companies were due to pay dividends in order for the many parties involved to claim rebates on taxes that they never paid. The two men are cooperating with the authorities in a bid to avoid jail. 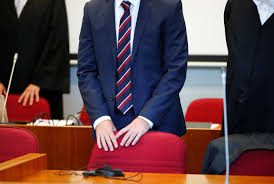 The UN High Commission of Human Rights Michelle Bachelet has condemned a decision by some former Colombian rebels to take up arms again. A group of former FARC leaders announced last week that they were returning to armed struggle because the government was not abiding by a peace agreement. Miss Bachelet said going back to violence was wrong.

We believe that returning to war is not the answer to the delays in the implementation of the peace agreement. They have said that they're going back to war because basically agreement has not been respected. The peace agreement was always thought to be a process not a one day to another process and the peace agreement continues to have a transformative potential for the broad enjoyment to human rights and to be an example for the world.

The authorities in Indian-administered Kashmir have placed the mayor of the region's main city Srinagar under house arrest a day after he criticized the ongoing security clampdown. Junaid Azim Mattu said the revoking of the special status of the region had caused an existential crisis because it had formed the very basis of Kashmir's identity.

An auto rickshaw driver in the Indian capital Delhi has been fined four hundred and fifty dollars, nearly forty times his day's earnings for violating traffic rules under newly introduced penalties. The government increased fines from the 1st of September in an attempt to reduce road accidents.

1.he accused the Labour leader of being fret following his support for what Mr. Johnson called more dither and delay.

I'm in a dither about who to invite.
我拿不定主意邀请谁;kte@Y5JsV6A;R)_TkW(。

2.The two men are cooperating with the authorities in a bid to avoid jail.

in a bid to 为了

I come here in a bid to assess the situation.
我到这里来是为了调查情况vM3qN[I]%M。