BBC News. Hello, I'm Jerry Smit. The Brazilian President Jair Bolsonaro has ordered the armed forces to help fight a record number of fires in the Amazon rainforest. In a televised address, he said that wildfires could happen in any country and that shouldn't be used as an excuse for international sanctions. All the countries have expressed solidarity with Brazil. They have offered to help tackle the wildfires and have also offered to take Brazil's position to the G7 meeting. Wildfires can happen anywhere and they should not be used as a pretext for international sanctions. Mr. Bolsonaro's announcement came after intense pressure from European leaders who had threatened to scrap a major trade deal with a south American trading bloc. Environmentalists accused the Brazilian president of encouraging farmers and loggers to clear the rainforest. The Amazon wildfires have been added to the agenda of this weekend's G7 summit in France. 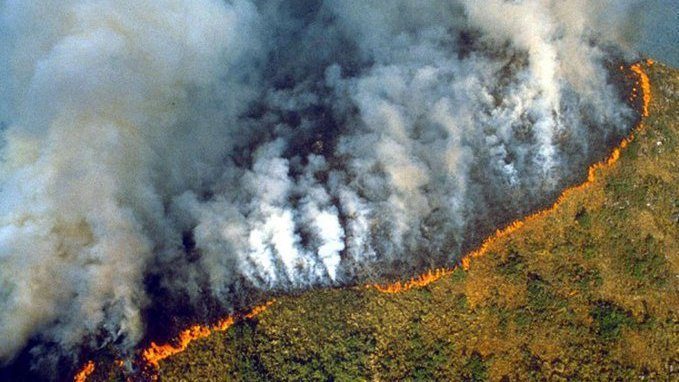 The leader of India's opposition Congress Party Rahul Gandhi is traveling to Indian-administered Kashmir, despite warnings from the state authorities not to go. He and a group of other opposition politicians plan to assess the situation on the ground and make concerns about the current security clampdown in the state. Jill McGivering reports. It's three weeks since the BJP-led government in Delhi announced a radical change to Jammu and Kashmir status, a move opposed by many Kashmirists and by some opposition parties, including Congress. Since then, communications, especially in the Kashmir Valley, have been severely restricted. Hundreds of government critics were detained or put under house arrest. The security forces are imposing a virtual curfew. On Friday, a protest ended in violent clashes. The state administration warned the politicians not to visit, saying they would inconvenience other people. Indian politicians are paying tribute to the country's former finance minister Arun Jaitley who's died in hospital in the capital Delhi.
Mr. Jaitley, a closer aide of the current Prime Minister Narendra Modi, helped to shape economic policy during Mr. Modi's first term.

The former Spanish King Juan Carlos is undergoing heart surgery in Madrid, after an undisclosed problem was picked up during his annual medical in June. Officials say Juan Carlos, who's eighty-one, has been living a full life since the condition was detected, including winning a yacht race in Finland. He abdicated in 2014 in favor of his son Felipe.

For the first time ever, Australia's basketball team has beaten the United States, the world champions. More than fifty thousand fans in Melbourne saw their side stun the Americans with a 98-94 victory. Australia were behind late in the game, but edged into the lead and held on to win. Correspondents say it's a wake-up call for the Americans. BBC News.

1.Mr. Bolsonaro's announcement came after intense pressure from European leaders who had threatened to scrap a major trade deal with a south American trading bloc.

Some banks also have a hit list of people whom they threaten to sue for damages.
一些银行还列出一个黑名单，威胁要控告这些人，要求赔偿损失8A|^=7)hE,tU3。

2.The former Spanish King Juan Carlos is undergoing heart surgery in Madrid, after an undisclosed problem was picked up during his annual medical in June.

They've picked up a really nasty infection from something they've eaten.
他们因吃错东西而得了很严重的感染症b[!khr.jz(H5。

3.Correspondents say it's a wake-up call for the Americans.

These riots should be a wake-up call for the government.
这些暴乱该为政府敲响警钟了]IJzvlf)JC[。