A fire at an animation studio in Kyoto, Japan, has left more than 30 people dead and dozens more injured, making it the deadliest fire in Japan in nearly two decades. The man suspected of starting it is in custody. Earlier I spoke with Alastair Gale. He is the Japan editor for The Wall Street Journal. And he first explained what this animation studio, Kyoto Animation, means to Japan.
ALASTAIR GALE: Well, animation is one of the things that makes Japan famous. It's — you know, produces — lots of animations are very popular in the movie theaters here. People read them in comic books, on the trains. It's sort of very much part of the culture here. So companies like Kyoto Animation, you know, really sort of signature businesses for the Japanese economy. And this particular company produces mainly comic books and films, which are about young women, high school women, and it's been doing that since the 1980s.
SHAPIRO: Any idea why it would be a target for an attack like this?
GALE: Yeah, it's unclear at the moment. What we know from a few witnesses is that the person who is being detained by the police may have harbored a grudge against the company. We are told by the police that he did — he was not an employee of the company, either now or in the past. But one of the eyewitnesses said that when the police detained him and were questioning him, as they took him away, he was saying that — he was basically accusing the company of stealing his ideas. He was calling them copycats.
The president of the company did say that he — they'd received death threats for several years, but he wasn't specific about who was sending those threats and whether this person who's been detained was someone who has been involved in that kind of thing.
SHAPIRO: As you said, the work of this company, Kyoto Animation, has had a global reach for years. People feel a deep connection to the characters that have come out of this studio. What is the reaction like today in Japan?
GALE: Well, shock, obviously. You know, the scale of death is something that's unusual for Japan. We don't have many of these kind of, you know, violent incidents here. The death — murder rate rather, is...
SHAPIRO: Yeah.
GALE: ...Is very low in Japan. Violent attacks are relatively rare. So, generally, there's shock at the — that something like this would happen, and there have been people gathering around the offices of this company in Tokyo, as well as in Kyoto, to sort of, you know, express their feelings and show how distraught they are by all this. And the prime minister as well has expressed his shock. 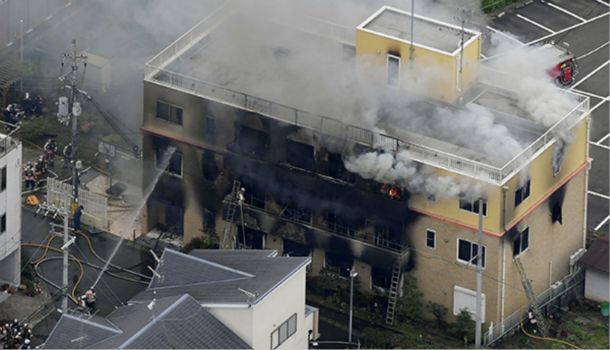 SHAPIRO: That was Alastair Gale, the Japan editor for The Wall Street Journal. People are reacting with shock to this fire far beyond Japan. Kyoto Animation has fans around the world, including Micaela Mussell. She is an audio editor in Santa Cruz, Calif. She describes herself as a super fan of the studio.
MICAELA MUSSELL: Their coloring is off the charts. It's a different level from most other animation studios. And you can see the love and detail that they put into their work just by the flow of the animation and the range of colors that you don't normally see.
SHAPIRO: Give us an example. Tell us about one of your favorite creations of theirs.
MUSSELL: A movie called "A Silent Voice" that they put out, which was an adoption of the comic, and it was about a deaf girl who wanted to put herself more out into the world. And the visuals that they had made, the colors that tried to show the difference in her emotions throughout the movie — it was just gorgeous, and it's hard to describe in words without seeing it. But it was just beautiful (laughter).
SHAPIRO: Is there a way that fans are coming together today? Have you seen a lot of reaction online? Are people trying to do anything for the studio or at least sharing things that really moved them that the studio created?
MUSSELL: Yeah. So on Twitter all today and all yesterday when it happened, there's been a hashtag — #PrayForKyoAni.
SHAPIRO: That's an abbreviation of Kyoto Animation — KyoAni.
MUSSELL: Yeah. Where people are sharing their favorite shows that they have made and some moments that they've really enjoyed from those shows. And people are just really coming together to try to honor all the work that they've done. In this event, we don't know how many directors we've lost because the names haven't been out yet. So everyone is just hoping for the best and coming together.
SHAPIRO: Micaela Mussell — she now works as an audio editor in the Japanese music industry. Thank you for joining us.
MUSSELL: No problem.
SHAPIRO: And we've been talking about the fire that took place earlier today at Kyoto Animation studios in Japan.

重点讲解：
1. be suspected of 怀疑（某人有罪）；
He resigned after being suspected of theft.
他被怀疑有偷窃行为，随后就辞职了RMtM,1J#Cw]@&nB。
2. take away 带走，抓走(送去监狱、医院等)；
Two men claiming to be police officers called at the pastor's house and to﻿ok him away.
两个自称是警察的人来到牧师家里，把他带走了b1ak5TLg,y6#A^^TehR。
3. be involved in 卷入的；参与的；与…有密切关联的；
The report says it suspects foul play was involved in the deaths of two journalists.
该报道称怀疑两名记者死于谋杀s^wgid).Y94mDD,sm。
4. off the charts 打破记录；好极了；
None of it could have happened without off-the-charts courage.
如果他没有过人的勇气，这一切都不可能发生p5|W(xRk.b。