BBC News. Hello, I'm Jerry Smit. President Trump has said he'd be willing to step into North Korea when he travels to its border with South Korea on Sunday. Mr. Trump's comments came a few hours after he invited the North Leader Kim Jong-un to an impromptu meeting at the heavily fortified border. Laura Bicker reports from Seoul. The invitation to Kim Jong-un was made on Donald Trump's Twitter account. The North Koreans described it as interesting. They haven't said yes and they haven't said no, but they did request a more formal invitation. Mr. Trump said if the meeting did happen, he wouldn't call it a summit. He said it would be a handshake. He also acknowledged that Mr. Kim might not turn up. The DMZ has a military line which officially separates North and South Korea. Mr. Trump said he was very comfortable with the idea of stepping over it. If he does, it would make him the first sitting US President to step into North Korea. 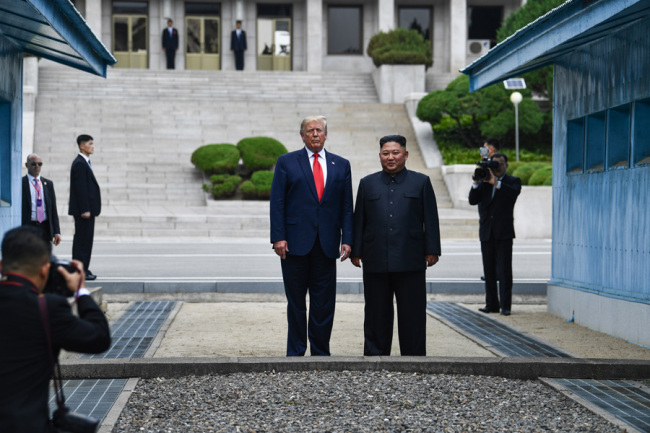 The Turkish President Recep Tayyip Erdogan has castigated the European Union for delivering less than half the six billion dollars it pledged to help Turkey accommodate migrants. He told a news conference at the G20 summit that Turkey and Jordan have been left to bear the burden of the war in Syria. He said Western nations that are very critical of human rights abuses in other countries had failed what he called this fundamental test of humanity. More than twenty pro-government militiamen have been killed in what's reported to be a Taliban attack in Afghanistan's Baghlan providence. Electra Nasmyth reports. The governor of Baghlan's Nahrin district said the Taliban had launched a large scale offensive on militia checkpoints in the area. He said the clashes continued for several hours before the militants left with a large haul of weapons and military equipment. The attack comes as the Taliban sit down with US negotiator's endeavor for a seventh round of talks aimed at ending the Afghan conflict. It was US-led forces that removed the militants from power in 2001, but the Secretary of State Mike Pompeo said this week that the hour for peace had come.

The ruling military council in Sudan says a proposal submitted by the African Union was suitable for the resumption of talks with the opposition. A council spokesman said the plan could form the basis for negotiations on forming a transitional government. The proposal provides for the creation of a governing body overseeing the transition to civilian rule.

The main opposition party in Cameroon says its chairman Ni John Fru Ndi has been abducted for a second time this year. A spokesman for the Social Democratic Front said the kidnappers seized Mr. Fru Ndi from his home in Camera's English-speaking northwestern region on Friday afternoon. BBC news.

1.He said Western nations that are very critical of human rights abuses in other countries had failed what he called this fundamental test of humanity.

I had heard through the grapevine that he was quite critical of what we were doing.
我听到有传言说他对我们在做的工作非常不满AYn%Z=hSQUa2E=F.S^U。

2.The proposal provides for the creation of a governing body overseeing the transition to civilian rule.

Both the petitioner and respondent provide for the upkeep of the children.
离婚上诉方和被告方共同抚养子女FyO~@]@U2tM+1R7_3KIn。

3.He told a news conference at the G20 summit that Turkey and Jordan have been left to bear the burden of the war in Syria.

The developing countries bear the burden of an enormous external debt.
发展中国家背负着巨额外债B@V-#Cl6@K1。