Kissing the Pope's Ring: An Issue of Debate
This week, Pope Francis visited a Catholic shrine in Loreto, Italy. He repeatedly withdrew his right hand as a long line of people lowered their heads and tried to kiss his ring. The tradition of kissing the pope's ring is hundreds of years old and is meant to show respect and obedience, the Washington Post explains.
The images of Francis withdrawing his hand spread quickly on social media. The pope's refusal became an issue of debate among Catholics.
LifeSiteNews, a Catholic website that often criticizes the pope, called the event "disturbing" in the headline of an article. That article included a long history of the rings that popes wear and their importance in Catholic history.
Austen Ivereigh has written a book about the current pope and is a supporter of Francis. He answered the social media storm in a Tweet. "He's [Pope Francis] making sure that they engage with him, not treat him like a sacred relic. He's the Vicar of Christ, not a Roman emperor," Ivereigh wrote. Vicar of Christ is a term that refers to the pope.
On Thursday, Vatican spokesman Alessandro Gisotti addressed the criticisms aimed at Pope Francis. Gisotti stated the Francis pulled his hand away because he was concerned about hygiene. The pope did not want the long line of well-wishers to spread any sickness by kissing his ring, one after the next.
I'm Kelly Jean Kelly.

We have all witnessed the power of social media.
我们见证了社交媒体的实力shZK-~4^j8R5!T!uL。

He'd pulled away from her as if she had leprosy.
他离她远远的，好像她得了麻风病似的3QwiEG42_;Skc-9RE。

5.That article included a long history of the rings that popes wear and their importance in Catholic history.

a long history of 历史悠久的

6.He repeatedly withdrew his right hand as a long line of people lowered their heads and tried to kiss his ring.

a long line of 一长队的；一长串的

It's the latest in a long line of tragedies.
这是一长串悲剧事件中最新的一件MQg|=&qZ3s]x8#。
A long line of people formed outside the doctor's office.
医生的诊所外排了长长的一队人2C~0Dp%u=^=981s。 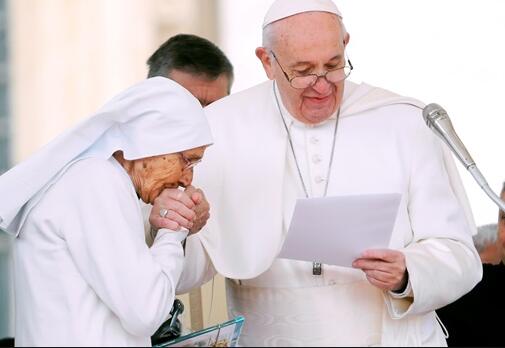