Woman Reaches Lifelong Goal of College Degree at 84
Many people, some even at a very young age, set the goal of graduating from college. One American woman in Texas waited a long time for her chance to reach that goal.
The woman is 84-year-old Janet Fein. Last week, she received her bachelor's degree from the University of Texas at Dallas.
Fein has had a full life. She has raised five children and then had a career as a secretary until she retired at age 77. But even then, she was not ready to take it easy and rest during a well-earned retirement.
"I didn't have anything to do in retirement and I didn't think that playing bingo was up to my speed," Fein told the Associated Press. She said she decided to major in sociology because she felt it was "substantial."
Fein grew up in the Bronx area of New York City. She said that in high school, she just wanted to finish and get a job. After graduating early, at the age of 16, she went to work as a secretary at a dress manufacturer.
After getting married, she spent 18 years staying home with her children. She held several jobs throughout her life, including 20 years as a secretary at a Dallas hospital. That is the job she retired from in 2012. She also worked for 20 years on earning an associate degree, which she received in 1995.
But Fein told the AP she also wanted to earn a bachelor's degree "with all of my heart." Even with all of her life experiences, she said she enjoyed reading, writing papers and learning new things. "With each class I already knew a lot, but then I also learned a lot. And that made me happy."
Fein took part in a state program that lets people who are 65 and older take free classes at public universities in Texas. State officials say about 2,000 people used the program last year.
Estimates show that nationwide, people 65 and older make up less than one percent of U.S. college students. But health experts say continuing with education later in life is one way to keep fit.
Carmel Dyer is director of the UTHealth Consortium on Aging at The University of Texas Health Science Center at Houston. She says that keeping active and giving yourself something to look forward to "is just a really positive move."
In Fein's case, she kept going to class even as her health conditions worsened. During her studies, it became necessary for her to use a walker to get around and she required oxygen. She also developed knee problems. So, Fein took online classes to finish the last part of her degree requirements.
Her college advisor was Sheila Rollerson. She told the AP that Fein never showed signs of giving up even with all of her difficulties. "She just kept plugging along," Rollerson said.
Tracy Glass, a 40-year-old student, became friends with Fein after they both took seats in the front of the class. "I sat right next to her and over the course of the semester, built a fast friendship with her," Glass said. She added that Fein's personal memories of world events - like the women's movement – improved a lot of the class discussions.
Carol Cirulli Lanham teaches sociology at the university. She agrees that Fein could make the classroom experience more meaningful for other students. "She would speak up a lot in class and I think that it just made for a more interesting class," she told the AP. "Because she literally remembered some of the times we were talking about."
Renee Brown is one of Fein's caregivers. She says Fein has also inspired her. At 53, she plans to begin nursing school to further her career. Brown said Fein told her, "Renee, you can do it. If I can do it you can do it, and you will feel so good about it,"
I'm Bryan Lynn.

If you have any complaint, don't just sulk; speak up.
你有意见提出来，不要闹意气0m^+GhMZ*)tb。

I think it's very unkind of you to make up stories about him.
我认为你编造他的谣言很不厚道k24WKJ8iDz^tW,7Q7+。

He got his bachelor's degree from Princeton University in 1962.
他1962年获得了普林斯顿大学的学士学位8SrD69vz.*yD|de*i1ko。

5.Fein took part in a state program that lets people who are 65 and older take free classes at public universities in Texas.

She took part in a BBC radio phone-in programme.
她参加了英国广播公司听众来电参与节目C.dI!oAh+Cduvu6oCu。
All the villagers, men and women, old and young, took part in the battle against the drought.
全村不论男女老幼，都参加了抗旱斗争HE7zWyyiLc3J83Vz^[H+。

6.But even then, she was not ready to take it easy and rest during a well-earned retirement.

Can't you take it easy? I know you're tired.
你不能不这么着急吗？我知道你累了6!8(),u|Sq,%r)5wd。
You can take it easy now since you are on vacation.
你现在可以放轻松了，因为你现在在休假0j+zMrb(=Ev)lfL。 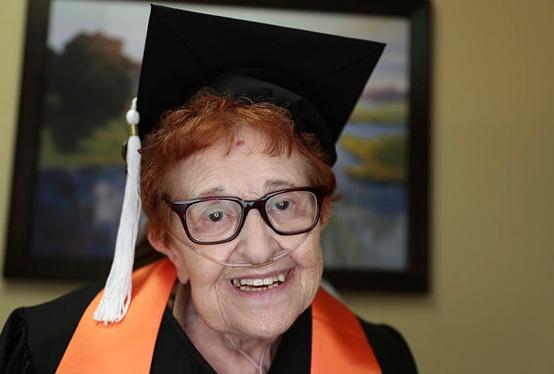