Donald Trump has dismissed the reported conclusions of the CIA that Russia interfered to help him win the US presidential election as ridiculous. In aninterview with FOX news, Mr. Trump said he didn't believe it, he said his Democratic Party rivals were just trying to find another excuse for their defeat. 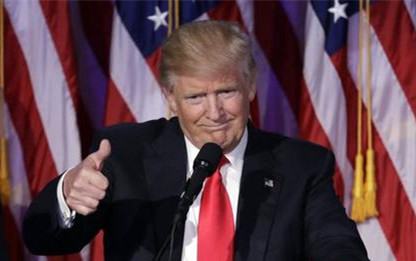 In the same interview, the US president-elect suggested he should not be bound by the one China policy, a statement that's likely to be greeted with alarm in Beijing. He suggested the policy should be tied to other things such as trade. The one China agreement under which the US acknowledges Taiwan as part of China has been the bedrock of Sino-American relations.

Islamic state militants have retaken control of ancient Syrian city of Palmyra after being driven out by heavy Russian airstrikes overnight on Saturday. The governor of Holm province said government forces had withdrawn but were regrouping in preparation to expel the Jihadists.

Exit polls in Romania suggest the social democrats have won Sunday's general election. They lost power a year ago and made public protest against corruption after deadly fire at Bucharest night club that had allegedly bribed officials to ignore safety breaches.

The Macedonian singer Esma Redzepova, who became known as the queen of Romanian song, has died, she was 73. Redzepova was one of the first vocalists to record in the Roma language and became an ambassador for her people worldwide.

I would certainly dismiss any allegations of impropriety by the Labour Party.
对于工党指责我行为不正当，我当然不会理会cFfqBU&pxbDLoFhC。

It's almost a foregone conclusion that you'll get what you want.
你将得到你想要的，这几乎是确定无疑的Vh|3]OqG^0r*]iWX3w@。

You have to acknowledge that we live in a racist society.
你得承认我们生活在一个有种族偏见的社会中)(|pAVKU%F。

The poor suburbs traditionally formed the bedrock of the party's support.
贫穷的郊区在传统上构成了支持该党的牢固基础^23m0m%jez_。

He promised to appoint an AIDS czar to deal with the disease.
他许诺任命一位艾滋病大使来应对这种疾病Jil!UoUh_Q]Txkl=n。

She'd half expected him to withdraw from the course.
她多少已经预料到他会中途就退出这门课程6acU#8W1egYgPG#5T7lD。

They threatened to expel him from his adoptive country.
他们威胁将他驱逐出他的移居国&YV5*S7t,j82。

The operation could prolong his life by two or three years.
这次手术可使他多活两三年gIgIYu&~gs。

1.Islamic state militants have retaken control of ancient Syrian city of Palmyra after being driven out by heavy Russian airstrikes overnight on Saturday.

He cut his rates to drive out rivals.
他降低价格以便挤走竞争对手TO+Yl]y#MQbzAvht!z-。

2.The governor of Holm province said government forces had withdrawn but were regrouping in preparation to expel the Jihadists.

Signing Cryptography information in preparation to publishing it in the Directory Service.
签署加密信息以便在“目录服务”上发布~VFQYcZ]^2!nznjwO,b。