The Italian Prime Minister Mateo Renzi has arrived at the presidential palace in Rome to submit his formal resignation. It follows his crushing defeat in Sunday's constitutional referendum. The president will have to decide how best to move the country out of its its present predicament. 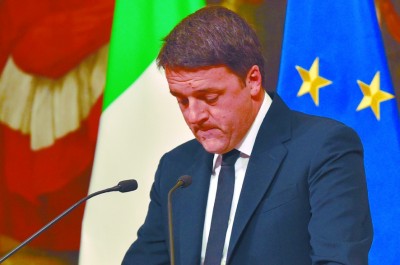 Manuel Valls says he is resigning as prime minister of France to seek the socialist party's nomination for next year's presidential election. Opinion polls have suggested that Mr Valls is the favorite to win the socialist ticket, but analysts say the chosen candidate may struggle to reach the second round.

Hospital authority in Tamilnadu has announced the Jayalalithaa Jayaram, the chief minister of the southern Indian state and one of india's most popular political leaders has died after a prolonged illness. Yesterday she suffered cardiac carest. The former film star Jayalalithaa was idolized by many Tamilnadu even though she was briefly imprisoned for corruption.

An appeal court in the Gambia has ordered the release on bail at the opposition politician Ousainou Darboe and 18 others. Their release come three days after president Yahya Jammeh lost election after 22 years in power.

The United Nations says an investigation into allegations of sexual abuse by peacekeepers in the Central Africa Republic has identified 41 of the alledged perpetrators, 25 were from Burundi and 16 from Gabon.

The South American Football Confederation has officially declared the Brazilian football club Chapecoense champions of this year's Sudamericana Cup following the accident that killed most of its players.

And Chinese investors have bought a traditional British pub where President Xi Jinping enjoyed a pint of beer and fish and chips on a visit last year. He was taken to the hostelry called The Plough by the then British Prime Minister David Cameron. Since then it has become a tourist attraction for Chinese visitors.

Those are the latest stories from BBC news.

I had asked everyone to submit questions in advance of the meeting.
我已请每个人在会议之前提交问题HxmM8d]h8JP。

He knew the nomination was his for the asking.
他知道只要他开口就能得到那项提名MlU5PE2(42f.hj(hdY3_。

Idolize their favorite rappers and know all they songs.
崇拜着他们最喜欢的RAPPER并熟悉他们的每一首歌2@v@W_*Gf9f。

You can lock up a person physically, but you cannot imprison his heart.
人的身体可以被囚禁, 人的心却不可以cxALgLlR_]4。

The perpetrator of this crime must be traced.
对这起案件的凶手必须要一查到底Hu8@WLNSuhU9fSg!(L*。

Why don't we adjourn to the local hostelry?
我们怎麽不搬到本地旅馆去住呢？

1.It follows his crushing defeat in Sunday's constitutional referendum.

2.An appeal court in the Gambia has ordered the release on bail at the opposition politician Ousainou Darboe and 18 others.

He was freed on bail pending an appeal.
他被取保候审]p4c+Y]e_aA。