Greece has a new football team called Hope Refugee United.
Every one of its players is a refugee.
It all started with a few young men kicking a football around at a refugee camp near Athens. Americans know the game as soccer.
The newly formed team has played only a few games as Hope Refugee United. Now, the players are dreaming bigger as they take part in trials to form an official league team. Their hope is to compete against some of Greece's best teams in the coming weeks.
For the love of Football
For many of the players, this chance to compete fills an important void in their lives. They find life in their refugee camp at times frustrating, and with little to do. Sometimes, there are fights between people of different ethnicities.
However, a shared love of the sport of football has begun to bring the refugees together.
Seventeen-year-old Fahim Ahmad fled to Greece from Afghanistan. He says that when he and others formed teams to play football, the refugees seemed friendly and less tense. The players did not care about ethnicity. They only wanted peace and to make friends.
Professional Support
The refugee team now has received support from a number of people, including Petros Kokallis. He is a former vice president of Olympiakos, one of the country's most famous football teams. His non-governmental organization called Organization Earth, has been providing support for football training.
"This team is going to compete in a Greek championship, so we think this is a great opportunity for these guys to represent their community in the wider Greek community and interact with it."
Thanks to Organization Earth's support, the players now make trips out of the refugee camps to a play on a better field.
Organization Earth also has helped with other projects. At the Skaramagas refugee camp, the group is showing children to play the sport. Petros Kokallis hopes to expand the efforts and get the football players out of the camp as often as possible.
"One of the main goals of the program is to de-ghettoise refugees and get them out of camps and get them into normal society"
These efforts have been working for the players of Hope Refugees United. As the team trained for its third game, player Ali Shaheen explained why the name of their team feels just right.
"I feel like football makes me alive. I play football with the friends, the guys. I feel like I forget all of the bad stuff, really. I feel like I forget everything. I don't think about the past, the war, anything. I just think about my future."
I'm Phil Dierking.

It has rained for a week straight, the week in which you stumbled a refugee into my camp.
雨连续下了一个星期b(7a@dyKK8*oer。就在这个星期里，你成为避难者，无意间进入了我的领地Q,58ioqc^uqdJrIL[。

There was an aching void in his heart.
他心中有悲痛的空虚感.

On that day, no matter where we came from, what God we prayed to, or what race or ethnicity we were, we were united as one American family.
在那一天，不管我们来自何处、不管我们向哪一位神灵祈祷，也无论我们的种族如何，我们都团结在一起，整个美国就像一个大家庭NdhG&*DGrh@CKltRqq~5。

I beg you not to ghettoize them just for the reason that they are poor.

1."This team is going to compete in a Greek championship, so we think this is a great opportunity for these guys to represent their community in the wider Greek community and interact with it."

Interact with readers. Readers should be the focus of any good blog.
和读者互动 读者应该是任何好博文的焦点Mb@KTT]D,t5zRv。
How do we interact with this thing?
我们怎样与这个东西互动？

2.It all started with a few young men kicking a football around at a refugee camp near Athens. Americans know the game as soccer. 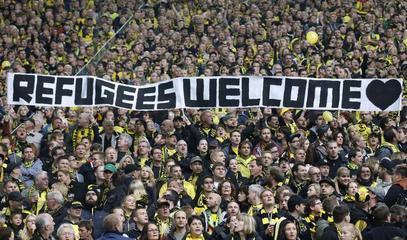