BBC News with Jerry Smit.
One person has died in Haiti, as one of the most powerful Atlantic hurricanes in recent years approaches the country. Hurricane Matthew is expected to cause flooding and landslides, when it makes landfall in the next few hours. Its center is expected to pass over the southwest of the island with sustained winds of 260 kilometers an hour.
The Colombian President, Juan Manuel Santos, has met opposition leaders to find a way to salvage the peace process, after voters rejected the deal that was four years in the making. He's appointed senior government officials to discuss ways of amending the landmark peace agreement with the FARC rebel group.
Amnesty International has lambasted the world's wealthiest nations for shirking their responsibility towards refugees, saying they host the fewest and do the least. It said that the situation would get worse, until every one of the richest countries took in refugees in proportion to their size, wealth and unemployment rate.
The U.S. Republic presidential candidate, Donald Trump, has boasted that he's used the law brilliantly to pay as little tax as legally possible. He told reporters that it was his duty as a businessman to use the tax laws to the benefit of himself, his investors and his employees. 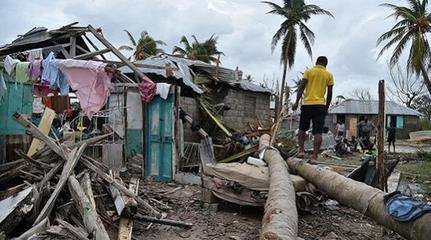 France and Spain are trying to get plans for an immediate truce in Syria adopted by the U.N. Security Council, following acrimonious breakdown of a deal brokered by the United States and Russia. The proposals include the cessation of military flights over Syria's second city, Aleppo.
The Philippines and the United States are holding military exercises, despite a recent statement by the Philippine leader, who said he wanted to end the war games with the U.S.
And the Red Cross has repeated its calls for urgent humanitarian aid to North Korea ahead of the coming winter. A spokesman said the conditions were seriously harsh after a heavy flooding in August.
BBC News.

By the time we had made landfall the boat looked ten years older!
等到我们登陆时，这艘船看似已老了10年！

The lyrics ridicule Gadhafi and lambast him for his treatment of the country in the past four decades.
歌曲嘲讽了卡扎菲，抨击了他过去四十多年里对国家的所作所为Ll_r9H4_lk4r;p!。

He said the city had shirked its responsibility by not overseeing construction.
他说这座城市逃避了监管工程建筑的责任f)ef~A5b1%HG),l~o2aO。

And that is brilliantly and effectively conveyed in this painting where air and light fuse together.
而这种感觉在这幅画中表现得淋漓尽致，空气和光线融为了一体,z5_%GnuwJRsM。

Carol boasted about her costume.
卡罗尔吹嘘着她的戏装qPL-mue~V2GYkP^In。

The acrimonious debate on the agenda ended indecisively.
对这项议程的激烈辩论无果而终IOHEZljh%Fw|A。

He would not agree to a cessation of hostilities.
他不会同意敌对状态的停止,|jC!Wz&(^n。

1.And the Red Cross has repeated its calls for urgent humanitarian aid to North Korea ahead of the coming winter.

He had to work hard to remain ahead of his classmates.
他必须努力学习以保持他在同学中的领先地位7mO7;-u^oH。

2.He told reporters that it was his duty as a businessman to use the tax laws to the benefit of himself, his investors and his employees.

to the benefit of 有利于

And if they are smart - and I think they are - they will also seek ways to exploit the rules to the benefit of their own industries.
如果中国人够聪明 - 我认为他们确实如此 - 他们也会为了本国行业的利益而寻找可以利用这些规则的方法TGw|0kcBd^2*XNfaWQPA。