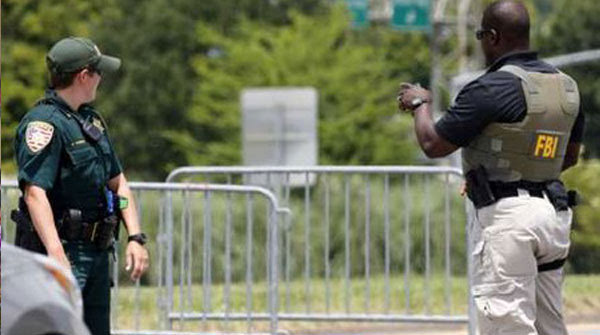 Three policemen have been shot dead in Baton Rouge in American state of Louisiana. Officers say they don't yet know the motives for the shootings, nor whether there is any connection of the killing by police of a black man earlier this month. Officers were shot out wihle investigating reports of an armed man. The gunman was shot dead by a police. Here is Jean O'Brien. The investigation in Baton Rouge is now trying to establish whether the 9·11 emergency call was made to lure police into an ambush or whether they were killed in the line of duty after responding to a genuine crime. The shooter has been identified as Gavin Long, aged 29 from Missouri. Armed police had converged on the house in Kansas City where it's believed he lived and warned people to stay away from the scene. In response to the Baton Rouge shooting, the US Republican presidential candidate Donald Trump criticized President Obama for a lack of leadership. Mr Trump's comment came a day before the start of the Republican National Convention in Cleveland, Ohio.
The Turkish president Recep Tayyip Erdogan has again said his country will consider reinstating the death penalty in the wake of Friday's failed coup. Speaking at a mass rally of his supporters, Mr.Erdogan said those responsible for the uprising would pay a heavy price. Around 6,000 people have been detained including a number of judges and prosecutors.
The Columbian authorities say almost 100,000 Venezuelans cross the border this weekend to shop for basic goods. Candice Piat reports. People had come from across Venezuela to take advantage of the second reopenning of the border. They made long bus journeys to buy oil, flour, sugar and medicines. Venezuela's severe economic crisis has led to shortages of food and basic goods. And much of people's day is spending in queues. The opposition blame the government for the economic crisis, saying its policies have left businesses unable to import raw materials. The government says it is the victim of an economic war.
The former French President Nicolas Sarkozy has critized the government for what he called it's a failure to protect the country against terrotist attacks. Authorities said Mohamed Lahouaiej Bouhlel, the man responsible for Thursday's attack in Nice had been radicalized too quickly for officials to act. Jucy Williamson reports. Democracy must not be weak, said Mr.Sarkozy, nor simply commemorate. Democracy must say 'We will win the war'. France's government has said it seized itself at war with violent Jihadists. But a third major attack in 18 months has led to criticism of the country's leaders and divisions over how to respond. FFrance's latest attacker wasn't tagged as a Jihadist. Neighbours described Mohamed Bouhlel as a violent loner, who liked to drink, lift weights and salsa dance. World news from the BBC.
Moroco has formally announced its wish to rejoin the African Union. The Mococain king declared his government wishes in a message sent to the AU Summit in the Rwanda capital Kigali. Arion Scapel reports. The diplomatic push by Moroco to rejoin the AU was expected and King Mohammed VI has now said that time has come for his country to retake its natural place within its institutional family. He said AU member has for long time asked his country to return to the fold. Moroco, one of the founding nations of the predecessor of the AU, the Organization of African Unity, left the bloc 32 years ago, when it recognized Western Sahara as a member state. Moroco latest claimed to the territory. The state of Western Sahara is likely to remain a thorny issue. The AU said on Friday that it will continue pushing for the rights of the people of Western Sahara to hold its self-determiantion referendum.
The British Foreign Secretary Boris Johnson has expressed deep concern over an order by a court in Bahrain. That's the main shiah opposition group Al-Wefaq should be disbanded. He urged the government of Bahrain to guarantee and protect political freedoms for all its citizens.
Malaysia Airline has appeared to strike a deal to provide compensation to the relatives of most of the victims of its flight MH17, which was shot down over eastern Ukraine two years ago. A Dutch lawyer representing many of the victims' families says the broad outlines of a deal are in place. An international enquiry determined that the passenger plane was hit by a Russian-made missile.
The United Nation's Cultural Organization UNESCO has listed 17 works by the modernist architect Le Corbusier as World Heritage Site. Le Corbusier spearheaded the mordern movement after World War One, using iron, concret and glass to make buildings with bold clean lines. UNESCO said the works reflected a new architectural language. And that's the latest BBC news.

例句：The car is some 40mm shorter than its predecessor.
这辆轿车比原先的车型短了约40毫米VZnf%!onYjLxQ。

例句：The 200th anniversary of Mozart's death is being commemorated around the world with concerts featuring his work.
世界各地将举办以莫扎特的作品为主题的音乐会，以纪念他逝世200周年N1]A,KBWb~fFZ7。

1.Malaysia Airline has appeared to strike a deal to provide compensation to the relatives of most of the victims of its flight MH17, which was shot down over eastern Ukraine two years ago.

例句：They claimed to have shot down one incoming missile
他们声称击落了一枚来犯的导弹U,]#RG&7H&%_5DMx。

例句：She was able to shoot the rumour down in flames with ample documentary evidence.
她能够用充分的书面证据将传闻彻底粉碎M_xEe@f5Iww。

2.Armed police had converged on the house in Kansas City where it's believed he lived and warned people to stay away from the scene.

例句：Your son has stayed away from me for a week.
你儿子离开我已有一个星期了+u)hW;PVP6U!1hpfv。