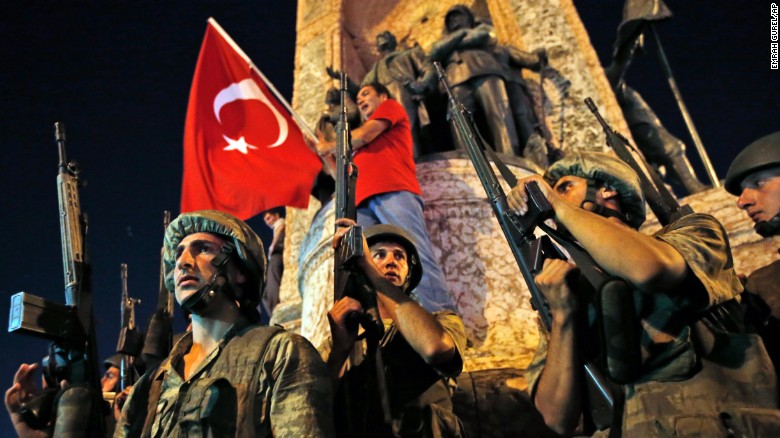 Gunfire and explosions have been heard in the two biggest cities in Turkey, where an attempted coup is underway. A statement from a section of the army has been read out on television saying the military is in control of the country. President Recep Tayyip Erdogan has said the group will not succeed. Katy Watson reports. Several hours after the military declared a take-over, the Turkish intelligence service has gone on television to say that the coup attempt has been dispersed. Meanwhile, in Ankara a Turkish fighter jet has shot down a helicopter that was apparently used by military responsible for the take-over. But there is still a very confusing picture on the streets of Turkey. There’ve been no more statements from the military, but there are helicopters constantly flying overhead. Defying a curfew, many supporters came out onto the streets of Istanbul and Ankara and there are some reports of clashes.
Within the last few minutes, state media in Turkey is reporting that the parliament building in Ankara has been hit by a bomb. There are also reports of a large explosion in central Istanbul. A state-run news agency says 17 police have been killed at the headquarters of special forces in Ankara. The coup attempt happened as President Recep Tayyip Erdogan was in holiday. He is being interviewed on television calling on people to protest in support of democracy. He said he was flying back to Istanbul. James Robbins reports. Whatever the eventual outcome in Turkey, President Erdogan has polarized the country. Many conservatives, particularly outside the main cities, applaud his combination of nationalism and Islamism, reversing women’s rights, seeking to undo the secularism of the modern Turkish Republic established by Ataturk almost a century ago. But his undoubted success transforming the economy in the early period of his 14 years in power has also expanded a young middle class. They demand a well-functioning Western faith in democracy. Mr Erdogan stands accused of crushing political opposition, imprisoning dissident military commanders and journalists, closing newspapers and seeking to demonize all Kurdish separatists, not just extremists who use violence.
The US Secretary of State John Kerry has said he called the Turkish Foreign Minister and emphasized America’s support for Turkey’s democratically elected government. Speaking in Moscow as the news first broke, he told reporters that he hoped Turkey would soon see a return to stability. We've heard the reports that others have heard. I don’t have any details at this point of time. I hope there will be stability and peace and continuity within Turkey. But I have nothing to add with respect to what has transpired at this moment. One of Turkey’s allies, the Gulf state of Qatar, has denounced the coup attempt. You are listening to the World News from the BBC.
A Paris prosecutor has said the attack in Nice in which a truck driver mowed down 84 people on France’s national day bore the hallmarks of Islamist militancy. The driver was a Tunisian named Mohamed Lahouaiej Bouhlel. Lucy Williamson is in Paris. What made Mohamed Bouhlel kill, a father of three with a troubled marriage and a history of violence and petty theft? Neighbours described him as strange and a loner, but French authorities had not seen him as a security risk. The stories of his victims have also started to emerge, smiling out from intimate family snaps—Sean Copeland from Texas with his 11-year-old son, a French tobacconist Timothe Fournier, who gave his life to protect his pregnant wife. The motives behind this attack might still be unclear, but its impact is all too familiar to France.
President Obama described the Nice attack as a threat to all. He said that the United States stood united with France as both countries tried to defend their nations against the scourge of terrorism and violence. He added that the US would keep fighting what he called a wild terrorist organization.
The US government is releasing long-awaited classified parts of a congressional inquiry into the 9-11 attacks. The classification of 28 pages had sparked speculation that the attackers, who were mainly Saudi, had received official Saudi support. However, a White House spokesman has dismissed the claim.
India has hit back at Pakistan after Islamabad declared a young militant in India Kashmir a martyr of the independence movement. The separatist, Burhan Wani, was killed a week ago by Indian troops. India’s foreign ministry said it was dismayed that Pakistan continued to glorify terrorists. It alleged that terrorism aimed at India continued to spread across the two countries’ common border. BBC News

例句：He surprised me with his intimate knowledge of Kierkegaard and Schopenhauer.
他对克尔恺郭尔与叔本华的深刻了解让我很吃惊lc(3*mug4cKLT&a6(.D。

例句：It transpired that Paolo had left his driving licence at home.
后来才知道保罗把驾照忘在家里了227f2Nr=zoC|)vP。

例句：Missile deployment did much to further polarize opinion in Britain.
在英国，导弹部署极大地导致了意见进一步分化e3HVcOn6.&S1oJN~。

1.He is being interviewed on television calling on people to protest in support of democracy.

例句：One of Kenya's leading churchmen has called on the government to resign.
肯尼亚宗教界的一位重要人物已呼吁政府下台gx9ilB4hbSWWRk7X_。

2.A statement from a section of the army has been read out on television saying the military is in control of the country.

例句：He's obliged to take his turn at reading out the announcements.
轮到他大声宣读通知了^JrRxJI#PcEr_r。