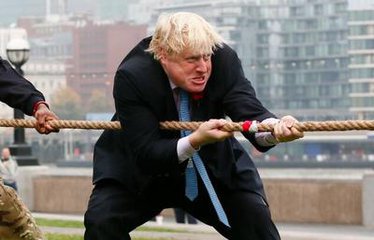 Britain's new Prime Minister Theresa May has taken office, promising that the country will forge a bold new role for itself in the world as it leaves the European Union. Speaking in Downing Street after her appointment, Mrs. May said her government would work for everyone, whether rich or poor, and she directly address people who she said were just managing. The government I lead will be driven not by the interests of the privileged few, but by yours, we will do everything we can to give you more control over your lives. When we take the big course, we will think not of the powerful, but you. The new prime minister invoked the full name of her Conservative and new union's party, to defend what she called the pressure's bound between the nations of the United Kingdom. Mrs. May surprised many with one of her first cabinet appointment, making Boris Johnson foreign secretary. Mr. Johnson was one of the leading campaign is to leave the European Union. Here is James Robins. The word diplomacy and Boris Johnson has not until now tented to share the same sentence but suddenly he’s Britain's top diplomat in charge of foreign policy as well as two of the intelligence agencies MIC and GCHQ. MIC和GCHQ. The same as Mr. Johnson had been appointed, the new foreign secretary spent about half an hour in his new palatial office with the permanent secretary and a few key foreign officials. Boris Johnson will have to hit the ground running. He is due to meet his European Union counterparts, the foreign ministers of the other 27 member states for a working dinner in Brussels on Sunday. Brexit will dominate the menu.The German Chancellor Angela Merkel and the French President Francois Holland have called Mrs. May to congratulate her and her appointment as Prime Minister. Downing Street said Mrs. May had emphasized commitment to delivering Britain's exit from the EU. The European Commission President Jean-Claude Juncker has wished her every success in the task ahead. A BBC correspondent says that though cordial, Mr. Juncker is concerned that the British government appears to be no hurry to start formal negotiations to leave. The Islamic State group has confirmed the death of one of its top military commanders Omar al-Shishani A news agency linked to IS said Shishani described by the Pentagon as the militant groups' minister of war was killed in combat in Iraq. Morales Shishani is a correspondent with BBC Arabic. Most observers who are tackling the issue of the Islamic State, they always put Omar Shishani in the highest rank of IS, maybe some people put him in the most important three people or four people. Also Omar Shishani played a major role in attracting the so-called north fighters towards Islamic State. World news from the BBC. Reports from Syria say a number of people have been killed in an airstrike in market places in two rebel held areas in the north of the country. Local activists said at least nine died in the town of Beriha in Idlib province. Meanwhile the state news agency says rebel shelling over the past few days has done huge damage to the museum in the city of Aleppo. The United States has send troops to South Sudan to protect the country's embassy in Juba and American citizens there. The deployment of 47 soldiers follows recent violence between rival factions and the South Sudanese army which has prompted fears of return to civil war. A further 130 US military personnel in nearby Djibouti has said to be ready to provide support if needed. A court in Zimbabwe has freed a pastor whose social medium campaign against government mismanagement prompted a nationwide strike. Throughout the case the magistrate said prosecutors have changed the charges against Pastor Evan Muwalerdy without warning. This report from Grant Ferit. Hundreds of supporters of Evan Muwalerdy erupted into cheers when he appeared as a free man outside the court in Harrari. With the Zimbabwe flag drifted around his leg, the pastor told the crowd, many of them holding a loft candles in the darkness that the strike against corruption must continue. Prosecutors had initially charged him with inciting violence when he was arrested on Tuesday. They then accused him of attempting to overthrow the government. The magistrate throughout the case saying he should be warned at the new charge before appearing in court. Police in India have arrested a Muslim man Nimrhan Batu who’s one of the main suspects accused of burning a train in Gujarati state 14 years ago. Sixty Hindu Pilgrims were killed, police say he has been on the run ever since, revenge attacks saw at least a thousand people, most Muslims, killed. BBC news.

例句：This is why presidents begin setting up their foreign policy teams before they take office.
这也是历届总统在正式就职前便开始组建对外政策班子的原因Hcf7SW;d*d70;f[jXNK。

例句：Show your new employer how you're going to solve a specific problem, fill in a missing need, or simply be someone who can hit the ground running on a specific and manageable task.

例句：In one area of your life, you are doing well and are soon due to do better.
在你生活中的某一领域，你正做的很好并且很快将变得更好mabJ@YtF7Me。

例句：That is what our commitment to the next generation demands.
这是我们对下一代人作出的承诺所要求的Ll=Z113pPdC。

例句：As concerns the good which I may appear to do, I have no faith in it.

1.Hundreds of supporters of Evan Muwalerdy erupted into cheers when he appeared as a free man outside the court in Harrari.

例句：Widespread corruption and an increasingly conspicuous wealth gap fuel a contempt for officialdom that can easily erupt into the kind of class-based rioting that occurred in Anhui in June.

例句：She erupted into laughter when I said I was late.

2.Prosecutors had initially charged him with inciting violence when he was arrested on Tuesday.

例句：She has yet to be charged with any crime.
她还没被控告犯下任何罪行!yHi3NO&mrR=W。

例句：NIA is deeply disturbed by how U.S. politicians and the mainstream media have been calling for WikiLeaks founder Julian Assange to be charged with treason.
美国政客和主流媒体是一直要求以叛国罪起诉维基解密的创立者阿桑奇的做法让NIA深深感到不安D6%u_zQOG_8|hePhEy8)。