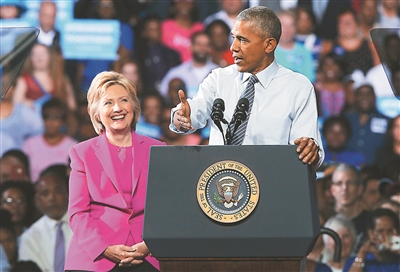 In the United States the FBI says it won't recommend criminal charges against Hillary Clinton,the using a private email server to deal with classified government data when she was the Secretary of the State.The bureau's director James Comey said the democratic party's presumptive presidential candidate has been extremely careless, but there is no sign of intentional misconduct. Although the Department of Justice makes final decisions on matters like this, we're expressing to Justice our view that no charges are appropriate in this case. I know there will be intense public debate in the wake of this recommendation as there was throughout this investigation. What I can assure the American people is that this investigation was done honestly，competently, and independently. A spokesman for the Clinton campaign said she had acknowledged her mistake and considered the matter resolved. The White House said president Obama will not discuss the FBI investigation. But within hours of the FBI's announcement,the president made his first appearance on the campaign trail alongside Mrs.Clinton. He said he believed in Hilary Clinton.
The Chairman of the British Inquiry Into Iraq War the has said he hopes his report will ensure the military intervention on such a scale will not be possible in the future without more careful analysis and political judgement. John Chilcot was speaking before his report is published on Wednesday. He said he will not shy away from criticizing individuals or institutions.
United Nation's Human Rights Organization has told BBC that around 900 civilians men and boys captured by Shia militia group during the battle to drive IS out Fallujah last month are still unaccounted for. He said witnesses saw at least 4 men beheaded by militia men and dozens more have been shot. He urged the Iraqi government to take urgent action.
The Home Secretary Theresa May has won the opening round of the Conservative Party leadership election in Britain with a clear majority. The new party leader will take over as prime minister from David Cameron who resigned after the country voted to leave the EU. Row Watson has the latest. This is a strong result for Theresa May confirms as state as favorite. She said it showed she was the only candidate capable of drawing support from the whole of the Conservative Party. The first ballot also suggests the prominent leave campaignor Andrea Leadsom is likely to be her strongest challenger. Ultimately the decision will be taken by the conservative party's 150,000 or so members out in the country. You're listening to world news from the BBC.
Multiple rescue operations in the Mediterranean have saved at least 4500 migrants in the calls of a single day.The Italian coastal guards along with navy and EU border agency ships as well as vessels run by humanitarian groups recovered the migrants from numerous inflatable dinghies and wooden vessel.
King Salman of Saudi Arabia has promised a firm response in the aftermath of the serious suicide attacks. He was speaking a day after 4 security officers were killed in a bombing closed to the prophet's mosque in Medina, the second most sacred site in Islam. Allen Johnston reports.
It's not yet clear who carried out these extreme attacks but they were probably the work of Islamic State Group. And it's clear that Islamic militants have Saudi Arabia very much in their sights. Now King Salman has sent them a message in an obvious reference to the extremists. He said his country will as he put it strike with "iron hand" those who try to influence the minds of young people. He knows that dangerous forces are trying to recruit the kingdom's youth.
The United States has criticized Israeli plans to build hundreds of new homes in existing settlements in the west bank in east Jerusalem. A state department spokesman John Kobe said if the reports of the 560 new homes were accurate, it will be the latest step in what seem to be a systematic process of land seizures and settlement expansions. Mr.Kobe said this was a fundamentally undermining the prospects for a two-state solution.
Investigators is examining the cockpit voice recorder from an Egyptian plane that crashed into the Mediterranean have reportedly discovered that the pilot attempted to put out a fire just before the disaster. This is yet to be officially confirmed. All 66 people on board were killed when it plunged into the sea in May. BBC News.

例句：They were spotted after three hours adrift in a dinghy.
他们在小舢板上漂浮了3个小时后才被发现u3Ko.|miCQG^c^91Y!。

例句：He has a security clearance that allows him access to classified information.
他获得了安全许可，可以接触机密信息PqU,9ZhW!S3N58R@;5。

1.Investigators is examining the cockpit voice recorder from an Egyptian plane that crashed into the Mediterranean have reportedly discovered that the pilot attempted to put out a fire just before the disaster.

例句：Firemen tried to free the injured and put out the blaze.
消防员们竭力救出伤者，扑灭大火Vyd+6]~6)Hg.P1Pgv|+。

例句：He crossed to the nightstand and put out the light.
他走到床头柜边，把灯关掉%mC7h[E+*;^q。

2.He said he will not shy away from criticizing individuals or institutions.