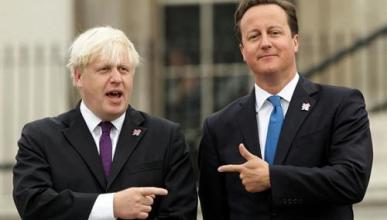 It’s just two and a half weeks until Britain’s EU referendum. If the country votes to remain by a reasonable margin, then by and large1 life will carry on pretty much as before for most people. However, if the UK votes to leave, the nation will be an unchartered territory with the Prime Minister David Cameron facing questions about his future. On Sunday, one of his predecessors John Major intervened on behalf of the remain campaign. And in a sign of how heated the debate has become, he didn’t mince his words, as I heard from our political correspondent Chris Mason.
Well, as John Major had a reputation as British Prime Minister in the 1990s of being dull even of being boring, he acknowledged today that he is often understated in his public interventions. And yet what he said in a BBC interview was anything but understated as he repeatedly criticized the leave campaign in the UK referendum.
And what they have said about leaving is fundamentally dishonest and it’s dishonest about the cost of Europe. And on the subject that they’ve veered towards having lost economic argument of immigration, I think their campaign is verging on the squalid. So these promises of the expenditure on the national health service or elsewhere are frankly fatuous. They are a deceit. I’m angry at the way that British people are being misled.
John Major of course faced immense troubles over Europe during his time as Prime Minister. What did the leave campaign say about it?
Yeah, I should say there was a chasm in the Conservative Party when it was governing Britain for much of the 1990s. Today it was as if he was trying to crowbar open, prize open that chasm even further. He clearly feels aggrieved how he was treated by some of the same people who were in his government 20 years ago, who are now leading advocates of the leave campaign. But there’s an additional figure, a big figure within the governing Conservative Party in the UK. That’s Boris Johnson, the former mayor of London. So what did he make of what Sir John Major had said and particularly the suggestion from the former British Prime Minister that Mr. Johnson was merely setting out5 his argument because he wants to be Britain’s next Prime Minister.
Obviously there’s going to be temptation by one side to try to turn into a personality driven conversation. My view by the EU has changed. We’ll be safer, taking back control.
The question is the extent too which this powerful intervention from Sir John Major will make any difference to voters.

例句：He told me that he loved me, and he didn't mince his words either.他说他爱我，而且说得一点也不含糊I]odvOX1ZbP8Is]S。

例句：I don't know what to make of his odd behaviour.
我不知道如何理解他的古怪行为c*=Y(e8KIDo&8Nd5QNI;。

例句：The doctors have set out their arguments against the proposals.
医生们已经陈述了他们反对这些提案的理由|0I(NGr~FFm)iU。

1.If the country votes to remain by a reasonable margin, then by and large1 life will carry on pretty much as before for most people.

例句：I hope to carry on for an indeterminate period.
我希望能进行一段时期[i(LqF!U[+。

2.On Sunday, one of his predecessors John Major intervened on behalf of the remain campaign.

例句：He gave witness on behalf of an accused person.
他为被告作证LoFNeBav1-l3。