Hello again, and welcome to As It Is. I'm Jonathan Evans in Washington.

Today on the program, we tell you how one talented dancer performing in a famous New York theater is sharing his abilities with children in Africa. But first, American colleges and universities have a new program to give foreign engineering students a chance to study and work in the United States. VOA reporter Karen Legett has more.

It is called the Charles M. Vest Grand Challenges for Engineering International Scholarship Program. The grand challenges are 14 big problems that could be solved by engineers in the 21st century. They include making energy from the sun more economical, providing more clean water, preventing nuclear terror, and making better medicines.

Eight American universities each offered one Vest scholarship in 2014. Rich Miller is the president of Franklin W. Olin College of Engineering in Massachusetts. He talks about the type of Vest scholars Olin College is seeking.

"The concept is to try to find very highly gifted individuals who are likely to make a difference in their generation. They are up-and-comers. People who are in graduate school now who have ambitions to make a difference on a large scale... We believe that the next generation, in order to achieve that vision, are going to have to work across the globe."

The first class of Vest scholars has already been selected. Applicants must propose a one-year research and study plan connected to one of the grand challenges. Applications for the next class are being accepted now atwww.vestscholars.org.

Another program for young, foreign engineers is Frontiers of Engineering organized by the National Academy of Engineering. Young engineers from 30 to 45 years old come together to listen to presentations about the newest developments in all types of engineering.

..."make sure that you design for some ground motion that has a small chance of happening. We want to be pretty conservative. This newer method goes beyond that and says we really want to quantify what is the chance of damage to the power plant, what level of round shaking should we design for."

C.S. Manohar is an engineer from Bangalore, India, who listened to Mr. Luco and invited him to come to India. Both of these engineers want stronger building rules to deal with the risk of earthquakes in all buildings, not just nuclear power plants.
These engineers are now looking for money to pay for further cooperation. But already Mr. Manohar says,

"Actually it has not translated into any specific action, but the mere awareness is also very important."

And I'm Jonathan Evans. You are listening to As It Is from VOA Learning English.

Many dancers and actors dream of performing on Broadway in New York City. One American dancer is living his dream. But he also shares his talents by teaching students in Rwanda. Bob Doughty has more.

A Dance Education for Children

American LaMar Baylor spends most of his time in New York City. He works as a performer in the Broadway musical "The Lion King." But since 2011, he has also spent weeks in Kigali, the capital of Rwanda. There he teaches dance to boys who live on the street.

His teaching is part of an effort by the Rebecca Davis Dance Company. The project helps young people learn more about dance – and learn how to behave in a classroom environment. 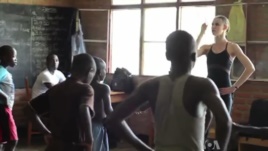 LaMar Baylor describes his students as genocide survivors. They have lost all of their families. Some have been in jail. Others have sold their bodies for sex.

"They have been through things that no one should ever have to go through."

He says dance classes provide the children with structured learning and self-expression that they have never had before.

Rebecca Davis is the founder and director of the dance company. She says she got the idea for the project after she visited Rwanda in 2008. She remembers meeting a large number of street children who were dancing. And, she thought that dance could be used to get them off the street and into a safer place.

Rebecca Davis believes that learning to dance is a step toward education.

"When you start to play music in Rwanda, these kids come out of nowhere and they enter the center. And it's because of dance that they have a way of exchanging their physicality, their survival skills that they learn on the street, and their strength, into something that is actually artistic and aesthetic."

She says children can take classes in information and technology after they have learned to attend classes and follow directions.

The boys who win scholarships are sent to the Sonrise Boarding School. About 30 boys have won this kind of financial aid.

She says all the students are male because few girls in Rwanda live freely on the street.

The Rwanda program is the largest one set up by the Rebecca Davis Dance Company. But Ms. Davis has also set up a dance program in Bosnia-Herzegovina and Guinea. About 2,000 children in the three countries have taken part in the project since it was launched in 2010.

As for LaMar Baylor, he knows from his own experience how dance can lead to a better life. He is from Camden, New Jersey. Camden has sometimes been called America's poorest and most dangerous city. Mr. Baylor says that, growing up in Camden, it took a long time for him to find out what he wanted to do. He now thinks dancing saved his life.

And that's our program for today. Be sure to join again tomorrow for another As It Is. I'm Jonathan Evans. Thanks for listening.