Welcome to As It Is from VOA Learning English. I'm Mario Ritter in Washington.

This week, President Obama gives his State of the Union Speech. Today, we hear how income inequality could be an issue discussed in his speech and during the year in American politics. Then, the U.S. is offering security help to Russia during the Winter Olympic Games in Sochi. Experts discuss how that may affect relations with Russia. American political issues and security at the Winter Olympics are next on As It Is.

Recent government studies in the United States show that the difference in income between the wealthiest Americans and everyone else is growing. A Congressional Budget Office investigation found that the wealthiest one percent increased their income by 275 percent in the past 30 years. That is compared to less than 40 percent for the majority of the U.S. middle class.

President Barack Obama is expected to talk about the income gap in his State of the Union speech. June Simms has VOA National correspondent Jim Malone's report from Washington.

From wealthy homes in California to the urban problems of Detroit, a recent congressional study says the income gap is growing. Minimum-wage workers recently protested in the streets of Atlanta to demand more money.
Erica Gayles is a fast food worker in Washington. She says she understands the protesters demands.

"It's a struggle. I'm tired of struggling. I just want to live comfortably."

Those struggles have caught the attention of Democratic lawmakers in Washington. Iowa Senator Tom Harkin is among them. 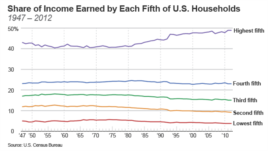 President Obama has spoken about the issue before. He has said that everyone willing to work and take responsibility should be able to take part in the American dream.

Of course, 2014 is an election year. That means political campaigns. Political expert John Fortier says income inequality will be an important issue for Democrats leading up to the November elections.

"The larger philosophical theme of not only the economy just getting better, but it getting better for everyone. And how an economy that improves just for the rich is not one that he wants to see, I think, will be a theme of his."

"When you look at it, the American people have a right to continue to ask the question, where are the jobs? The president has been in office now for over five years, and it's time for the president to admit that his policies are not working."

Republican Senator Marco Rubio of Florida is a possible presidential candidate for 2016. He says individual states should take the lead on closing the income gap.

Political expert Thomas Mann says President Obama will have to work around Congress because of strong Republican opposition.

"He is going to have to rely much more on the authority he has as president using executive regulatory approaches and administrative initiatives and other kind of public-private ventures that don't require legislation."

President Obama will travel to the Vatican in late March to meet with Pope Francis. The administration says fighting poverty and income inequality will be among the issues discussed.
I'm June Simms.

Next on the show, President Barack Obama recently spoke with Russian President Vladimir Putin. The U.S. is offering to help Russia strengthen security at next month's Winter Olympics in Sochi. The offer could help to improve relations between the nations or add to tensions. Christopher Cruise has this report from VOA's Kent Klein.

"What I can tell you is that we are having conversations with the Russians. We have made clear that we are prepared to provide any assistance that we can, if Russia asks for it, and we're going to continue to work with them."

The two leaders spoke a day after the U.S. Defense Department said it had offered Russia air and naval help to secure the Black Sea resort city of Sochi and the surrounding area.

James Goldgeier is dean of the School of International Service at Washington's American University. He says Mr. Obama and Mr. Putin do not agree on many issues. However, he said they can work together when necessary.

"The relationship between President Obama and President Putin is clearly not a strong relationship. That doesn't mean they can't do business when they need to do business, and I expect when they identify common interests, they will do so." 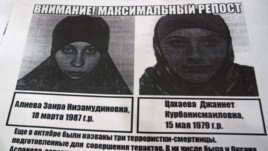 A police leaflet at a Sochi hotel, depicting Dzhannet Tsakhayeva (r) and Zaira Aliyeva, suspected of being suicide bombers, Jan. 21, 2014.

The discussion between the two presidents took place as Russia searched for at least three suspected female suicide bombers. One of them is from an Islamic militant group that claimed responsibility for two suicide bombings last month in Volgograd.

The U.S. State Department has released a travel alert, advising Americans who go to Sochi for the Olympics to be careful.

Jay Carney says increasing U.S. security measures is not unusual for a large international event such as the Olympics. He said there has been an increase in reports of threats.

"As you might expect, in the run-up to an event like this, there has been an uptick in some of the threat reporting, and we are taking precautions accordingly, but that is not unusual."

The presence of U.S. ships in the Black Sea could raise tensions with Russia. However, James Goldgeier says it shows that the U.S. shares the world's interest in preventing a terrorist incident at the Winter Games.

"I don't know that it's antagonizing, but I think, you know, it is a sign that the United States worries that Russia alone is not able to take care of the situation, and so the United States is prepared to do whatever it takes, and it has to, to make sure that its people are safe."

The U.S. and Russia disagree over the conflict in Syria. There are also tensions over Edward Snowden, who leaked U.S. intelligence documents and took asylum in Russia. Many people hope the security cooperation at the Olympics will lead to better relations between the two countries.

That's As It Is. Thank you for listening. Tell us what you want to hear about. Go to our webpage learningenglish.voa.com and comment on this article. Or follow us on Facebook, YouTube and Twitter. And be listening at the top of the hour Universal Time for the latest news.