Tom: I wonder how much longer we’ll have to put up with Dennis. He is the most incompetent boss I’ve ever worked for.

Katie: He’s not that bad, is he? I don’t have much contact with him. 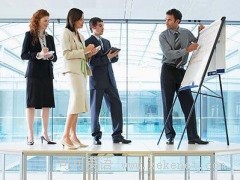 Tom: Are you kidding? He’s always sleeping on the job. The other day, he was supposed to keep an eye on the supervisors visiting from Salt Lake City. Instead, I heard that he went to a baseball game and the supervisors ended up stranded at the downtown office.

Katie: It’s hard to believe that he’d fall down on the job like that.

Tom: It’s not only that. He’s always passing the buck. Every time something goes wrong at the factory, he blames everyone but himself.

Katie: If he’s as bad as you say he is, he must be on his way out. But, you know what they say: “Better the devil you know than the devil you don’t.”

Tom: Yeah, I know, but I’m willing to take my chances.