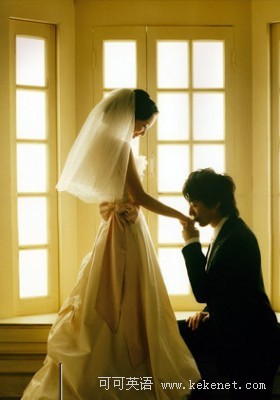 I got an invitation in the mail last month that really surprised me. My friend Ulrich was getting married! We went to college together and he always said that he‚Äôd never get married. I guess he found his dream girl in the end.

I arrived at the church shortly before 3 p.m. and one of the ushers asked me if I was a friend of the bride or the groom. I told him that I was a friend of the groom and he sat me on the left side of the church. I saw Ulrich standing near the front of the church with the best man, and a few minutes later, the pianist started playing the wedding march. The flower girl and ring bearer walked down the aisle, followed by the bridesmaid. Then, the bride appeared wearing a beautiful wedding dress, walking with her father who was giving her away. The bride and groom exchanged vows and they were married. It was a simple and traditional ceremony.

At the reception, there was a lot of champagne. The best man made a toast that really embarrassed Ulrich, but it was all in good fun. I got a chance to talk to Ulrich and he seemed really happy. In fact, he was try to set me up with the bridesmaid. I guess it's true. All married people want to get all of their friends married. We'll see about that!