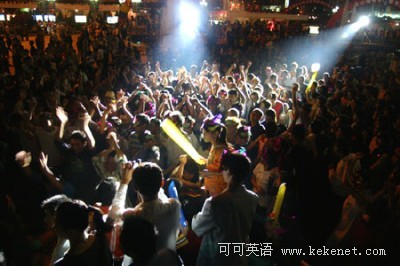 I walked into the office and saw Rob with his head down on his desk. I tapped him on the shoulder.

Christy: You look like you had a good New Year's.

Rob: Yeah, too good. I'm trying to catch up on sleep.

Christy: Oh yeah? What did you do?

Rob: I went to a New Year's party at the Key Club on the Sunset Strip with a few buddies of mine. The fireworks at midnight were great. I met this great girl there, too. Champagne was flowing everywhere and I had a great time.

Christy: Sounds like fun. What was the girl's name?

Rob: Uh It was Rosa or Rebecca, or something.

Christy: I see you really got to know her well. But, I thought you and Vince were going to the Rose Bowl Parade.

Rob: Yeah, we did. After we left the Key Club, we changed and took our stuff down to the parade route. We managed to find a place to camp out. There were tons of people there already. We ended up striking up conversations with some out-of-towners from Cleveland, and a couple who knew the grand marshal for this year's parade.

Christy: How was the parade itself?

Rob: It was great, I think. I fell asleep half way through it but the floats I saw were pretty amazing.

Christy: It sounds like you need a few days to recover .

Rob: Yeah, definitely. Wake me up when the boss comes in, will you?