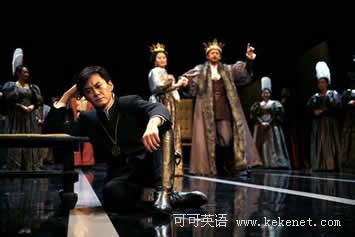 I ran into my neighbor, Dennis, yesterday afternoon. He asked if I wanted two tickets to the theater. He had season tickets but couldn't go to this performance. It was opening night of Shakespeare's The Tempest. I jumped at his offer and invited Lucy to come along.

We arrived at the theater a half an hour before opening curtain. We had the tickets in hand and didn't need to pick them up at the will call window. The doors to the theater were open and we handed our tickets to the ticket takers standing in the doorway.

We looked for our seats and were pleasantly surprised to find that we had some of the best seats in the house! I thought we would be sitting in the balcony , but we were in the orchestra section in the center. This was great! The lights dimmed and the curtain went up .

After the second act , there was an intermission. Lucy and I went into the lobby and bought drinks from the bar. After about 15 minutes, the lights flickered and we went back to our seats.

After the last act, the audience gave the actors a standing ovation. This was the best play I had seen in ages. The acting was superb, the staging and direction were fresh. I couldn't have asked for a better theater experience. I owed Dennis big time for giving me his tickets.